< Elon Musk Asks Twitter Followers about Selling Tesla Stock
Update Required To play the media you will need to either update your browser to a recent version or update your Flash plugin.
By Dan Friedell
08 November 2021


Elon Musk, the founder of the electric car company Tesla, recently asked people on Twitter if he should sell billions of dollars in company stock.

Musk is one of the world's richest people, so the request was unusual.

He asked his millions of Twitter followers whether he should sell 10 percent of his stock in the company. That amount might be worth $20 billion or more. As of last summer, Musk owned about 170 million shares of Tesla. 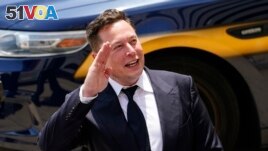 FILE - Tesla CEO Elon Musk, one of the richest people in the world, asked his Twitter followers Saturday, Nov. 6, 2021, if he should sell 10 percent of his Tesla shares. (AP Photo/Matt Rourke, file)

On Saturday, Musk placed a poll on Twitter, asking if he should sell the stock. About 3.5 million people voted, and nearly 58 percent said he should. "I was prepared to accept either outcome," Musk said.

On Monday, the shares of Tesla stock dropped a small amount. David Madden is a stock market expert in London. He said he did not believe the "dip" would last long. "Tesla has had such a phenomenal record of bouncing back from these sort of selloffs," he said.

Musk said he understands people are concerned that very rich people avoid paying taxes. For example, many people who own millions of shares in a company like Musk does, do not sell their shares when they need money. Instead, they get loans from banks based on the value of the stock.

If they do sell shares of stock, they get taxed, so they get the loans to buy something like a new home. Stock is not money. It is an ownership share in a company. Investors exchange stock for money by selling it on a market.

People who follow Musk's finances and company documents available to the public know that the businessman has a decision to make by next year.

Musk says he is paid in what are known as stock options instead of money. An option is a financial agreement. It permits the owner of the option to trade stock at a set price for a set period of time. After that time period ends, the option is worth nothing.

However, if he goes through with the option, he would have to pay a lot in taxes on the deal.

Bryan Springmeyer is a lawyer in San Francisco. He said it is unlikely Musk would take a loan to pay his taxes, so he thinks Musk will buy the shares and then sell some of them.

United States lawmakers have been thinking about ways to get very rich people to pay more taxes. They are discussing a plan to tax people who have large amounts of stock whether they have sold the shares or not.

Musk criticized the idea, saying: "Eventually, they run out of other people's money and then they come for you."

Ron Wyden is a U.S. Senator from Oregon. He leads the Senate Finance Committee. Soon after Musk's announcement, he said, "It's time for the Billionaires Income Tax."

Dan Friedell adapted this story for Learning English based on a report Reuters. Mario Ritter, Jr. was the editor.

What do you think of the plan to tax very wealthy people? Tell us in the Comments Section and visit 51VOA.COM.

poll – n. an activity in which people are asked a question or a series of questions in order to get information about what they think (often informally online)

phenomenal – adj. very good or great : unusual in a way that is very impressive

option – n. (financial) a right that is given by a company to an employee that lets the employee buy stock in the company usually for a price that is lower than the normal price for a certain period of time