< Elephants Dying in Sri Lanka from Eating Plastic Waste
Update Required To play the media you will need to either update your browser to a recent version or update your Flash plugin.
By Bryan Lynn
20 January 2022

The problem is not new in the country. Conservationists and those who treat wildlife said about 20 elephants have died in the last eight years after eating plastic waste. The incidents happened at a landfill near a village in the Ampara District, about 210 kilometers east of the capital, Colombo.

Nihal Pushpakumara is a veterinarian, a doctor for animals. He told The Associated Press that examinations of the dead animals showed they had swallowed large amounts of plastic that is not biodegradable. Biodegradable means a material can break down naturally in the environment. 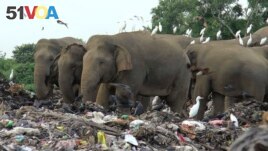 Different kinds of plastics were discovered inside the elephants along with other substances the animals could not digest, Pushpakumara said.

Elephants are deeply respected in Sri Lanka. They are also endangered. Their numbers have dropped from about 14,000 in the 19th century to 6,000 in 2011, the latest government data shows.

Pushpakumara said hungry elephants can end up eating plastics or sharp objects that can damage their digestive systems.

"The elephants then stop eating and become too weak to keep their heavy frames upright," he added. Unable to eat or drink, the animals can quickly die.

In 2017, the government announced a plan to recycle waste in dumps near wildlife areas, or zones, to prevent elephants from eating dangerous materials. Officials also promised to build electric fences around the areas to keep the animals away. But so far, neither plan has been fully carried out.

The government estimates there are 54 waste dumps in wildlife zones around the country. About 300 elephants move around these areas.

The landfill in Ampara was set up in 2008 with aid from the European Union. Waste collected from nine nearby villages is being dumped there but is not being recycled.

In 2014, an electric fence that protected the area was struck by lightning and was never repaired. Villagers said they fear the elephants, which moved closer and settled near the waste area.

Many people use fireworks to chase the animals away when they come into the village.

Others have built electric fences around their homes. But some of the local people do not know how to safely complete the fences. A village councilor in the area told the AP that people setting up electric barriers "could endanger their own lives as well as those of the elephants."

The official added, "Even though we call them a menace, wild elephants are also a resource." He called on local officials to find ways to protect both humans and the elephants, and to permit agriculture to continue.

The Associated Press reported on this story. Bryan Lynn adapted the report for VOA Learning English.

landfill – n. an area where waste is buried under the ground

conservationist – n. someone who believes that people should protect nature

digest – v. to break down food in the stomach into substances that the body can use

menace – n. something that is likely to cause harm