< Electric Car Makers Seek Substitutes for Rare Earth Metals
Update Required To play the media you will need to either update your browser to a recent version or update your Flash plugin.
By Alice Bryant
28 July 2021


Western electric vehicle (EV) makers are trying to reduce their dependence on rare earth metals from China. As tensions rise between that nation and others, including the United States, makers worry that supplies might become limited.

Electric vehicles use special magnets to power their engines.

Most are made from rare earth metals.

The metals are not really rare. But they can be dirty and difficult to process. And, China has become the leader in producing them. Demand for the magnets is growing for all forms of renewable energy. Experts say a real shortage may lie ahead.

Some automobile companies have been looking to replace rare earth metals for years.

Automakers in the West say they are concerned not just about securing supply. They are also worried about huge price increases and environmental damage that happens during production. 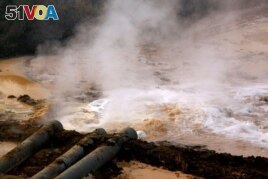 FILE PHOTO: Polluted water flows out of pipes from a rare earth factory near Baotou, a city in China's Inner Mongolia Autonomous Region in this picture from 2010. (Reuters)ure.

High costs for carmakers and environment

Rare earth magnets are mostly made of neodymium. The magnets are widely seen as the most effective way to power electric vehicles (EVs). China controls 90 percent of their supply.

Prices for neodymium oxide more than doubled during a nine-month period last year and are still up 90 percent.

Companies trying to stop using the magnets include Japanese carmaker Nissan. The company told Reuters it is ending its use of rare earths from the engine of its new Ariya model. Germany's BMW did the same for its iX3 electric sport utility vehicle this year. And the world's two biggest automakers -- Toyota and Volkswagen -- told Reuters they are also decreasing use of the minerals.

Rare earths are needed for the electronics, renewable energy and defense industries. Because some can generate a continuous magnetic force, the magnets they make are known as permanent magnets.

Electric cars with permanent magnets need less battery power and can drive farther than those with usual magnets. The special magnets were the clear choice for EVs until about 2010 when China threatened to cut the rare earth supply during a conflict with Japan. Prices rose sharply.

Now, supply concerns are opening a divide between Chinese EV producers and their Western competitors.

Though automakers in the West are cutting down, the Chinese are still making vehicles using the permanent magnets. A Chinese rare earths industry official told Reuters that if political risks are set aside, China can "fully meet" the world's need.

Now companies are developing electric engines without the metals or recycling more of the magnets from existing vehicles.

BMW says it has redesigned its EV technology to make up for a lack of rare earths. Carmaker Renault has made its Zoe model without rare earths for a growing number of city cars that do not need long battery life.

The U.S. electric car company Tesla will be using both kinds of motors.

Even though auto sales dropped during the pandemic, demand for neodymium magnets in EVs went up 35 percent last year alone.

The magnets are also in demand for wind power equipment called turbines.

For many EV drivers, distance worries may not be an issue.

"Most people are driving less than 100 miles a day," so for that you can have a less capable motor, said researcher Jürgen Gassmann. He is with the Fraunhofer Institute for Material and Beam Technology in Germany.

Yet, some companies, like Toyota, still use permanent magnets but have lowered use of rare earths. They developed a magnet that needs 20 to 50 percent less neodymium.

The use of electric motors without rare earth metals is expected to jump by almost eight times by 2030, says Claudio Vittori. He is an expert from the American-British information provider IHS Markit. But he said permanent magnet motors will still rule, mainly because of their power and efficiency.

If the predictions are right, it is unclear that even these changes can affect the rare earth metals market.

byproduct - n. something that is produced during the production or destruction of something else

recycle - v. to use (something) again

efficiency - n. the ability to do something or produce something without wasting materials, time, or energy : the quality or degree of being efficient

motor - n. a machine that produces motion or power for doing work