< Dutch Art Experts Enlarge Famous Painting Using Artificial Intelligence
Update Required To play the media you will need to either update your browser to a recent version or update your Flash plugin.
By Gregory Stachel
28 June 2021


A marriage of art and artificial intelligence, or AI, has made it possible to recreate missing parts from a famous painting in the national museum of the Netherlands in Amsterdam.

The painting is known as Night Watch by Rembrandt van Rijn. Parts of the painting were cut off 70 years after Rembrandt finished it in 1642. Rembrandt is considered one of the greatest artists of the "Golden Age" period in Dutch art and history.

The recreated pieces have been put directly against the painting. The museum's addition brings back the off-center focal point Rembrandt first created.

The two main subjects of the painting are Captain Frans Banninck Cocq and Lieutenant Willem van Ruytenburch who were members of a civil militia. They are at the center of the painting after it was cut. The new computer-created additions move the two to the right.

"It really gives the painting a different dynamic," Dibbits said. "And what it taught us is that Rembrandt never does what you expect."

The museum always knew the uncut painting was bigger because there is a smaller copy painted by Gerrit Lundens. 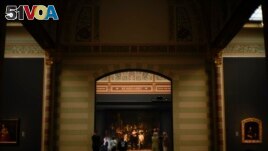 Dibbits said they made a detailed photograph of the Night Watch by combining 528 digital pictures. Then, they taught a computer, using AI technology, what colors Rembrandt would have used and how he would have painted.

The machine learning also permitted the museum to correct distortion from the painting's smaller copy. Lundens was sitting to one side of the painting when he made the copy.

There is a simple reason why Rembrandt's 1642 painting of an Amsterdam civil militia was cut. It was moved to the town hall and did not fit on a wall between two doors. It is a mystery what happened to the missing piece.

The digital recreation that will be shown in the coming months is part of the research and repair project called "Operation Night Watch." It began two years ago, before the coronavirus health crisis caused museums to close for months.

The museum is expected to welcome visitors but will accept only half the normal number as the Netherlands eases COVID-19 restrictions.

The painting last underwent major repairs more than 40 years ago after a man cut it with a knife. The painting also is starting to lose its color in some areas.

Dibbits said the reproduced additions are not meant to trick visitors into thinking the painting is bigger. It is to give them a clear idea of what it was supposed to look like.

He said, "Rembrandt would have definitely done it more beautifully, but this comes very close."

Julie Taboh reported this story for Voice of America. Gregory Stachel adapted it for VOA Learning English. Mario Ritter, Jr. was the editor.

focal point – n. a center of activity, interest, or attention

dynamic – n. the way that two or more people behave with each other because of a particular situation

distortion – n. changes to the normal appearance of an image caused by the process of copying it