< Dry Rivers Threaten Production of Clean Energy
Update Required To play the media you will need to either update your browser to a recent version or update your Flash plugin.
By Jill Robbins
22 August 2021


A severe lack of rain is drying up rivers and water supplies needed to produce clean energy in several countries. In some cases, governments are depending more on fuels that can pollute the environment.

Countries, including the United States, China and Brazil, are beginning to have problems with producing hydropower from hydroelectric dams. Scientists and energy experts say these problems are likely to continue as climate change causes more unpredictable weather.

Lack of rain, or drought, could also threaten international efforts to fight global warming. The International Energy Agency says that hydropower is the world's top way to produce clean energy. Nearly 16 percent of the world's electricity comes from hydroelectric dams.

This year, droughts have caused problems for hydropower generators in the western United States and Brazil. China is still recovering from the effects of last year's drought in Yunnan province on its hydropower production.

Those effects have forced power suppliers to depend on natural gas or coal fueled power. They are also asking businesses to cut their electricity use to prevent outages.

In California recently, the State Water Project was forced to temporarily close a hydroelectric power plant at Lake Oroville that could produce 750-megawatts of electricity. Low water levels caused the first closure since the dam was completed in 1967. In good years, the plant can power half a million homes.

Cary Fox is a team leader for the U.S. Bureau of Reclamation's operations in California. Fox said power production at Lake Shasta, part of the federal government's Central Valley Project in California, was about 30 percent less than usual this summer. 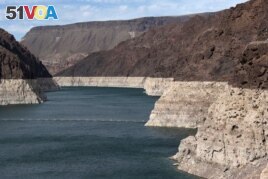 At Hoover Dam, on the Colorado River at the border of Nevada and Arizona, production was down by 25 percent last month, the agency said.

California Governor Gavin Newsom answered the power shortage in his state by suspending some environmental rules. He gave an order on July 30 to permit industries to use diesel fuel generators that give off more carbon gases linked to warming temperatures. The order also permits ships at ports to use generators instead of using local electricity. He also lifted restrictions on the amount of fuel natural gas plants can use to generate power.

Environmental activists have criticized those moves. They say they will pollute the air in California and weaken the state's efforts to fight climate change.

Tim Welch is director of hydropower research at the U.S. Department of Energy. He said the department is studying ways for dams to store water more effectively during rainy periods so it can be used during droughts.

Hydropower plants in the United States are usually able to supply about seven percent of the country's total energy production, Welch said.

In Brazil, hydroelectric power is the top provider of electricity. Drought recently cut water flows into hydroelectric dams to a 91-year low, the country's mines and energy minister said.

To replace the loss of power from hydroelectric plants, the country is seeking to use natural gas. This threatens to increase the release of carbon gases linked to climate change. The cost of power has increased by nearly 100 percent for some users since July.

José Marengo is a climate scientist at Brazil's disaster observation center. He said severe weather events like the current drought will become more common with climate change. He said Brazilians will need to change their thinking about water. "People always thought that water is unlimited, but it really isn't," Marengo said.

Bento Albuquerque is a minister of mines and energy for Brazil. He said the ministry is building power lines to send electricity where it is needed. He added that moving away from hydroelectric energy to solar and wind energy will help the country deal with such events and prevent the need to restrict water use.

However, Brazil will remain dependent on hydropower for years. By 2030, the energy ministry predicts about half of electricity will come from dams. The country is also planning to build more hydroelectric dams with neighboring countries.

Last year's drought in China's Yunnan province cut hydroelectric power generation by nearly one third during the first five months of 2020. Officials say there is about 10 percent less power produced there this year.

Yunnan usually produces 25 percent of China's total hydroelectric generation. Industries in the area use a lot of power. Some had to temporarily close when their power was cut earlier this year.

But storing more river water in China could worsen droughts in other places, experts say. For example, water held behind dams on the upper Mekong River in Yunnan has been blamed for affecting water in Thailand, Cambodia and Myanmar.

Sharon Bernstein, Jake Spring and David Stanway reported on this story for Reuters Jill Robbins adapted it for Learning English. Mario Ritter, Jr. was the editor.

province – n. any one of the large parts that some countries are divided into

What do you think of the waterpower problem? We want to hear from you. Write to us in the Comments Section.