< Dots and Spots
Update Required To play the media you will need to either update your browser to a recent version or update your Flash plugin.
By Anna Matteo
20 November 2021

Today we talk about dots and spots. 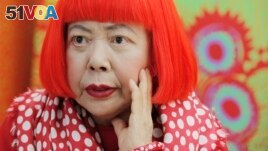 In this photo taken Wednesday, August 1, 2012, Japanese artist Yayoi Kusama wears a bright red wig and a Louis Vuitton polka dot scarf. Her art is known for its colorful use of dots. (AP Photo/Itsuo Inouye)

Now, both "dot" and "spot" can be used as a verb or a noun. And both have several meanings and can be used several ways.

Here is the most common definition of a dot: a small, perfectly round circle. A spot is small part of something that is different from the main part.

Recently, we learned on this program the idiom "a leopard never changes its spots."

Now, spots on a leopard are not perfect circles. They are small areas on the animal that are a different color. If we said the leopard had dots, it would mean the animal was covered in perfect, small circles. It would look as if it were wearing polka-dotted clothing. Clothing with polka dots are marked with little circles. But there is no such as thing as polka spots.

However, both words are used with "on the" – "on the dot" and "on the spot." But they mean totally different things.

If you are "on the dot," you arrive someplace at exactly the time you were expected to arrive.

Spot can also mean a certain place. For example, many people remember the exact spot of their first kiss. That is ... if it was a good one.

"X marks the spot" means an exact place you want something or where something is to be found. You might see this on a treasure map. The X on the map marks the spot where the treasure is buried. So, that definition is important to know.

Sometimes the spot is in our bodies. For example, if something like food or drink "hits the spot," it is much needed and comes at the perfect time. Other things can hit the spot. A warm room when you are cold or a night out with friends when you have been unhappy could both hit the spot. You needed them both.

However, more often than not, we use "hit the spot" for food and drink. For example, if you have been walking in the desert you might really need some water. In that case, a big drink of water would really hit the spot. And again, we do not say hit the dot.

Now, let's hear some of these expressions used. Since we already talked about treasure maps, let's stick with that situation.

Two friends are out in the woods looking for a buried treasure.

How long have we been walking in these woods?

How much farther does the map say to go?

We started up here near on this hill. This map says the treasure is buried on the other side. So, we have to keep walking.

How do you know??

Look at the map! X marks the spot ... right there!

I think we passed that spot an hour ago.

No we didn't. We have to keep walking north.

I am so thirsty!

Then drink some water and stop complaining.

Don't drink all your water! We still have hours of walking to do.

Hours! We told Jimmy we would be at the secret meeting spot at 10pm on the dot.

I did not agree to a specific time. So, Jimmy is just going to have to wait.

What if he leaves?

You know, I don't care if Jimmy leaves. We're doing all the work out here ... walking in the woods ... looking for a buried treasure. You know what I think?

I think if we find the treasure ... we should just keep walking. Keep it for ourselves!

I don't know. If Jimmy goes back to the boss without us and without the treasure ... I think he'll be able to connect those dots pretty quickly. And then we're dead!

Good point. Man! Why did we sign on the dotted line and agree to do this?? There has got to be an easier way to make a buck.

Yeah. Maybe we could open a bookstore or something.

Anna Matteo wrote this story for VOA Learning English. She recorded the sound effects around her home. Susan Shand was the editor.

polka-dot – n. a dot in a pattern of regularly distributed dots in textile design

treasure hunt – n. an act of searching for treasure

boss – n. the person at a job who tells workers what to do

buck – n. a sum of money especially to be gained