< Don't Sweat It and Other Sweaty Expressions
Update Required To play the media you will need to either update your browser to a recent version or update your Flash plugin.
By Anna Matteo
21 August 2021

Sweat. Those tiny drops of perspiration that make up part of our bodies cooling system. 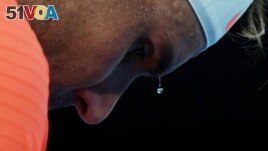 A bead of sweat drips from Spain's Rafael Nadal during his second round match against Michael Mmoh of the U.S., February 11, 2021. (REUTERS/Loren Elliott)

We also sweat when it is hot outside. But we wouldn't say we worked up a sweat. We didn't do any work. We just got sweaty by being hot.

We often use another verb when talking about sweating: break. For example, when I helped my friend move to her new apartment, I barely broke a sweat. That is because she doesn't own very much. I just needed to help her move some books, kitchen items, a box of clothes, and a cat.

Now, there are other situations when people may sweat. When we are very scared, nervous, worried, or simply uncertain about something, we could sweat. If any of these feelings go to an extreme, we might say we "broke out in a cold sweat."

For example, people who do not like to speak in front of strangers might break out in a cold sweat if they have to talk to a large crowd of people.

Sweating can also be a sign that you are unsure of your ability. That is why one popular advertisement for underarm deodorant had this famous expression: "Never let them see you sweat."

Sweating could also be seen as a sign that you lying -- or at least not telling the whole truth. If you watch crime shows, sweating is one thing police look for when they question a suspect of a crime.

Now, sometimes we use the word sweat in a strange way. Let's say you help someone do something. But it was really not a big deal for you. The person thanks you. And you can say to them, "No sweat!" This just means it was easy for you to do. But I would only use this with someone I know fairly well.

Here is another strange expression: "Don't sweat it." This is a way of saying "no problem" or "don't worry about it."

Here's a quick story. One time, my roommate and I decided to have a stoop sale. This is a fun way to get rid of stuff and make a little money. It also gives you a chance to see people in the neighborhood because the stoop is the front area of a building -- the part with the steps.

In the morning, we worked up a sweat carrying all the items down. But once things were set up, we could relax and talk to people who stopped by. It was really fun to get rid of things we no longer wanted. And by the end of the day we had earned nearly $100 to spend on a little party for everyone.

It was a really hot day and during the sale, I sweated up a storm. So, I took off my favorite jacket and set it aside. By the end of the morning, I couldn't find it. My roommate asked me, "Was it the black jacket with lightning on it?" "Yes," I answered. She quietly said, "I think I sold it." I could tell that she felt badly. So, to make her feel better I said, "Don't sweat it! It's not a big deal. Come on, let's order pizza and drinks!"

Inside, though, I must admit ... I was a little upset. It was my favorite jacket. But those feelings did not last long. There are too many serious problems in life. So, it is important to not get upset about small things. In other words, don't sweat the small stuff.

Here is my last note is on usage.

While "sweat" and "perspiration" are physically the same thing, the two words are often not used the same way. We do not say "perspiration" in the same informal way we say "sweat."

So, with all of the expressions we heard today, we only use the word "sweat." We would not say we "worked up perspiration" or "broke perspiration." And we definitely would not say, Don't perspire the small stuff.

And that's it for this Words and Their Stories. Until next time, I'm Anna Matteo.

perspiration – n. the clear liquid that forms on your skin when you are hot or nervous

stoop – n. a porch, platform, or stairway at the entrance of a house or building

informal – adj. suitable for ordinary or everyday use