< Do You Have a Sprinter or Marathon Mentality?
Update Required To play the media you will need to either update your browser to a recent version or update your Flash plugin.
By Anna Matteo
26 September 2020

Running is a popular form of exercise. It is something you can do just about anywhere. And the only equipment you need is good running shoes.

Some runners compete in marathons. They can spend months training for one of these 42-kilometer long events. So, to be marathoner, you need strength. You need endurance and stamina. These two words both mean the ability to do something difficult for a long time.

Now, a sprint is a different kind of foot race. Sprinters run at full speed over a short distance. So, they do not need endurance or stamina for a sprint. But they do need to run very fast. Sprinters need speed.

For today's program, we add the word "mentality" to "sprint" and "marathon." Sprinter mentality and marathon mentality describe two different ways to complete a project or solve a problem.

Now, just like in the race, with a big project you need to pace yourself. If you start to quickly and do too much, you may run out of energy.

A marathon mentality means that you are in something for the long haul. You are not going to walk away or leave before the job is finished. Here, "long haul" means a long period of time or a great distance. For example, long haul truckers drive their large vehicles over great distances.

Okay, now let's talk about sprinters. If you have a sprinter's mentality, you attack a problem with short, fast bursts of energy. There is no need to pace yourself. There's isn't time! 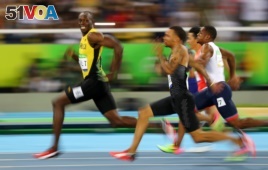 Jamaican sprinter Usain Bolt (in the lead) looks at the camera as he and other runners compete at the 2016 Olympics in Rio de Janeiro, Brazil. (Reuters Photo: Kai Pfaffenbach)

A sprinter's mentality means you do not hold back. You do something with all the energy you have. You can do this because you know the project (or problem) will only last a short time.

Now, a person can have both a mentality of a marathon runner and a sprinter. It may depend on the situation or project.

However, some people may be more one kind of person than the other.

Some people lose energy while working on a project. They lose steam or lose interest. They get bored. Or you might say they burn out. Maybe they have more of a sprinter's mentality.

And other people may need time before they start a project. They have more of a marathon mentality.

Please note, we use the term "sprinter mentality" or "sprinter's mentality." However, when talking about marathons, we usually say, "marathon mentality," not "marathoner mentality."

Of course, foot races -- both sprints and marathons -- have an end. You know, a finish line. But learning English or other languages is more of a lifelong event. So, you may need a sprinter's mentality to finish some tasks. But over the long haul, a marathon mentality may serve you best.

Whichever it is, just know that we, here at VOA Learning English, are cheering you on!

And that's Words and Their Stories for this week. Until next time, I'm Anna Matteo.

stamina – n. great physical or mental strength that allows you to continue doing something for a long time

pace – v. to control or set the speed of (someone or something)

lose steam idiom : to lose strength, force, or energy : to slow down

bored – adj. filled with or characterized by boredom

burnout – n. the condition of someone who has become very physically and emotionally tired after doing a difficult job for a long time