< Dinosaurs Enjoyed Nightlife, Too
Update Required To play the media you will need to either update your browser to a recent version or update your Flash plugin.
By Dan Novak
12 May 2021


Small dinosaurs once lived in the desert in today's Mongolia and northern China. Their great night vision and strong hearing made them deadly predators during the nighttime.

Scientists said Thursday they have found a circle of bones around the eye of a dinosaur called Shuvuuia Deserti. The bones were inside the skull, which holds the hearing organ. Scientists say the dinosaur had hearing and sight abilities much like an owl, meaning it could hunt in the dark.

Their study was published in the journal, Science. The research showed that most predatory dinosaurs had good hearing, but their sight worked best during the daytime. The Shuvuuia, however, loved nightlife. 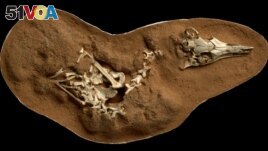 The fossilized skeleton of the small bird-like dinosaur Shuvuuia deserti is seen in this undated handout image. (Mick Ellison/AMNH/Handout via REUTERS)

The two-legged dinosaur was the size of a large bird and weighed about as much as a house cat. It had many small teeth, like pieces of rice. It was lightweight and lived during the Cretaceous Period, about 75 million to 81 million years ago.

Roger Benson is a paleontologist from the University of Oxford who helped write the study. "It's such a strange animal that paleontologists have long wondered what it was actually doing," he said.

Its mid-length neck, small head, and very long legs, made it look like an unusual chicken. But unlike birds, it had short, strong arms with a large claw on the end, which was useful for digging.

Jonah Choiniere is a paleontologist at Wits University in South Africa and the study's lead author.

"Shuvuuia might have run across the desert floor under cover of night, using its incredible hearing and night vision to track small prey such as nocturnal mammals, lizards and insects," he said.

The researchers also looked at a structure called the lagena. The lagena is a curved sack that sits in an area of bones around the brain. It is connected to the part of the ear that lets reptiles and birds keep balance and move their heads while walking. The longer the lagena, the better hearing an animal has.

The barn owl can hunt even in total darkness and has the longest lagena of any living bird, relative to its size. Shuvuuia also has a very long lagena, almost the same in relative size to a barn owl's.

The researchers also found that Shuvuuia had a very wide scleral ring -- tiny bones that circle the eyeball. The ring's large size means that it was able to see in darkness.

Choiniere said that he previously thought that during the age of dinosaurs, the night was used by mammals to come out of hiding and still avoid predators.

"The importance of these findings is that it forces us to imagine dinosaurs like Shuvuuia evolving to take advantage of these nocturnal communities," he said.

paleontologist – n. the science that deals with the fossils of animals and plants that lived very long ago especially in the time of dinosaurs

claw – n. a sharp curved part on the toe of an animal

prey – n. an animal that is hunted and killed by another animal for food

evolve – v. to change or develop slowly often into a better, more complex, or more advanced state : to develop by a process of evolution