< Different Areas in America, Different Second-person Plural Pronouns
Update Required To play the media you will need to either update your browser to a recent version or update your Flash plugin.
By John Russell
18 March 2021


In a recent Everyday Grammar, we briefly talked about a video that makes fun of the difference between two terms: y'all and you guys. 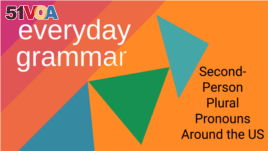 "Hey you guys, what are you all looking at?"

In today's report, we will explore this issue in more detail. You will learn a little about different areas of America, and how speakers in these areas sometimes use different pronouns in everyday speech. You can think of today's report as a tour of the United States. But first, let's explore some important ideas and terms.

In English grammar, we often describe pronouns in terms of person and number.

The person can be 1st, 2nd, or 3rd. The number can be singular or plural.

So, a person could say "How are you?" to one person or to a group of people.

In everyday speech, Americans sometimes use second-person plural pronouns that are not standard. These pronouns let the speaker show that they are speaking to several people.

Now, let's start with our trip.

Pennsylvania is the first stop on our tour of the United States. Let's listen to a man from the city of Pittsburgh. He is giving an example of how some people near there speak.

"Like if I was explaining to yinz like what I do on Sundays, what my dad does..."

Note that the speaker used the term yinz. It is a second-person plural pronoun that is used mainly in Western Pennsylvania.

Yinz is not standard American English. But it does play an important part in the sentence. It lets speakers show they are speaking to more than one person.

New York is the second stop on our trip around the U.S.

Consider these lines from A Bronx Tale, a crime movie about an Italian-American boy growing up in the Bronx, New York.

The speaker is telling a group of men that they cannot leave his business. They have insulted him, and he wants to fight them.

"I will never forget the look on their faces, all eight of them. Their faces dropped."

Speakers in other parts the U.S. use the word youse as well, but such usage is growing rarer.

A story in the Chicago Tribune suggests that youse is mainly used among older people in some parts of large cities – Philadelphia, Chicago, St. Louis, and Boston, among others. The story also notes that it is sometimes heard in the mining communities of Michigan.

"Part of the challenge here is that, this town, let's face it, you guys are pretty impatient."

You guys is the second-person plural pronoun that Obama used. You guys is quite common throughout the country, but mostly in the North, West, and Midwest. It is also probably more common in cities.

Our fourth and final stop is Texas. Let's listen to comedian Jerry Corley talk about language differences in the United States.

"There are certain parts of the country, you'll have pockets of the population that will say "y'all." But in Texas, everybody says "y'all."

Y'all is popular in Texas, and many other places across America, mainly in the South. It is probably more common in rural areas, too.

Y'all vs. you guys

Y'all and you guys are the two most commonly used second-person plural pronouns in the United States. They are acceptable in many kinds of everyday speech.

Y'all and you guys are also used in everyday kinds of writing – emails between friends, text messages, and so on. They are generally not used in official or formal writing – business agreements, legal documents, academic papers, and so on.

At the beginning of this report, we suggested that this video made fun of the difference between y'all and you guys.

"Hey you guys, what are you all looking at?"

Now you know that the video is making fun of differences between people in the U.S. In areas where many people use y'all as a second-person plural pronoun, you guys sounds out of place.

Understanding how different second-person pronouns are used in the U.S. can be useful for you. You can have an idea of what Americans mean when they are speaking. And if you hear you guys, y'all, youse, or yinz, you might have an idea of where the speaker comes from within the United States.

tour – n. a trip through different parts of a country

singular – adj. grammar : relating to a form of a word that refers to one person or thing

plural – adj. grammar : relating to a form of a word that refers to more than one person or thing

standard – adj. an example of something that is normal, usual, official or generally considered the correct way

comedian – n. a person who performs in front of an audience and makes people laugh by telling jokes or funny stories or by acting in a way that is funny : an actor who plays roles that make people laugh