< Cuban Cooks Overcome Shortages with Ingenuity on Facebook
Update Required To play the media you will need to either update your browser to a recent version or update your Flash plugin.
By Susan Shand
18 April 2021


Cooking can be tricky when you can not find the ingredients you normally use to make a meal. Many people face that very problem in Cuba, where the COVID-19 crisis has worsened food shortages in the country.

But now, they can find help just a computer link away on the Facebook page "Recipes from the Heart." Cuban Yuliet Colón is one of the page creators. 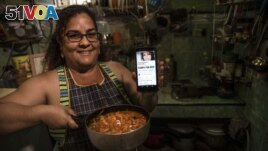 Contributor Yuliet Colon poses for a photo holding a pot of her creation, "Cuban-style pisto manchego," and her phone that displays the Facebook page, "Recipes from the Heart," in her home in Havana, Cuba, Friday, April 2, 2021.(AP Photo/Ramon Espinosa)

Colón guides Cubans on how to use the foods available to them to make the meals they love. She can help users make a sweet treat with the eggs they happen to find, or replace the pork called for in a recipe with whatever meat is at the market. She even knows how to substitute beans in Cuban rice dishes with peanuts.

Recipes from the Heart shares information on how Cubans can cook the foods they are likely to find at the market or through a government program.

Colón is a 39-year-old mother of two. She and other cooks launched the Facebook page in June. It now has more than 12,000 members, many of them in Cuba. Cubans are just starting to use social media due to improved internet speeds.

Long lines became normal last year. The year 2021 opened with government economic reforms that effectively raised both prices and pay, but not at the same rate.

Colón last week visited a food store and stood in line for 40 minutes. She was finally able to buy a few vegetables.

She used them to cook a food she called "Cuban-style pisto manchego." It is mostly made with vegetables. She received a lot of praise from her Facebook group.

These days, things every Cuban needs come and go without warning. One day there is toothpaste, then it disappears. Another day there is soap.

Different kinds of food appear and disappear as well.

Recipes from the Heart has become a home for ideas on how to cook chicken when it is the only meat in the store.

"There are a lot of shortages", said Colón in the small kitchen of her house. She is preparing her "pisto manchego." She photographs her cooking and then uploads the images.

She added a bit of fresh herbs she took from a relative's small garden.

She likes to make tasty sweet things, but explains that it is hard to find the needed eggs and milk.

The internet has led to an increase in food services including cooking and transporting meals. Cubans can share information on WhatsApp or Twitter about what stores have food or other goods.

Such social media sites are also influencing government officials to be accountable. For example, a government factory recently provided a frozen food that sometimes exploded during cooking. Many cooks protested about the problem online. So the government was forced to provide answers to the Cuban press.

Colón also uses the internet to talk to her mother, who helps pay for its cost. And, she often adds a few family stories to her recipe posts.

"The kitchen is my happy place," she said.

The Associated Press reported this story. Susan Shand adapted it for Learning English. Caty Weaver was the editor.

ingredients - n. one of the things that are used to make a food,

sanctions - n. an action that is taken or an order that is given to force a country to obey international laws by limiting or stopping trade with that country, by not allowing economic aid for that country

herb – n. a plant or a part of a plant that is used as medicine or to give flavor to food

kitchen – n. a room in which food is cooked