< Crime and Prepositions
Update Required To play the media you will need to either update your browser to a recent version or update your Flash plugin.
By Dr. Jill Robbins
22 July 2021


Reporters writing news stories must be careful not to say someone is guilty before a trial in a court of law gives a decision. The expressions we use to talk about crime and punishment use combinations of prepositions and verbs. Today we will look at some of these special patterns.

You will often find the word "suspect" used as both a noun and a verb in news stories about a crime. As a noun, it is the person officials think may have done the crime. We use the preposition "in" with the noun form of suspect. For example:

The suspect in the robbery ran away. 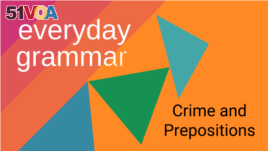 As a verb, it is the act of believing someone is guilty of a crime or of doing something wrong. We use the preposition "of" with the verb form suspect, and you often hear the passive verb form:

Susan is suspected of selling drugs.

Another word you will notice in news stories is "allege." Before a jury or a judge gives a decision, a reporter cannot say that someone has committed a crime. So, the media use this word to show someone is a suspect. A person is alleged "to" have done something.

Charles was alleged to have stolen the money.

When the police catch a suspect, we say they were arrested, or put "under arrest." If the reason for the arrest is given, you will find the preposition "for" nearby. Here is a sentence from our story on the murder of the Haitian president.

Among the suspects arrested for Mo&#239;se's killing are 23 former Colombian soldiers.

The next word you will hear often is "accuse" or to say that someone is guilty of a crime or a bad quality. The preposition following the object of this verb is "of." Here is a sentence from a recent news story:

The United States and its major allies have accused China of working with criminal hackers to carry out computer attacks worldwide.

The object of that sentence is "China," so the preposition "of" comes after it.

Anyone can accuse someone of a crime, but only an official can "charge" someone with wrongdoing. Here, you will find the preposition "with" following the object, as in this sentence from a story on the police officers involved in the death of George Floyd:

All four officers...are charged with failure to provide Floyd with medical care.

Guilty or not guilty?

After a suspect is charged, they must tell the court whether they are guilty or not. To plead guilty is to take the blame, or responsibility for a crime. The Associated Press guide for writers says that the past tense for the legal word is "pleaded." About half the time, you will read or hear people using "pled" as the past tense which also is used. Our question is, what is the correct preposition to follow "pleaded guilty?" Here is one example from a story about people accused of leading protests in Hong Kong:

Here is an example from our story about the bubble man of San Francisco:

Later in life he was found guilty of a crime and served time in prison.

Freedom or behind bars

I do not want to end this lesson on a down note, so I will give you one more verb pattern – after serving time, a criminal may be released "from" prison or jail. Recently, we reported this about several Hong Kong activists:

Conditions for their temporary release from jail include that they do not leave Hong Kong and that they hand over all travel documents.

My final advice is to do everything "by the book" -- that means to follow the rules and stay out of trouble!

pattern – n. the regular and repeated way in which something happens or is done

pronounce – v. to make the sound of words with your voice

stress – n. greater loudness or force given to a syllable of a word in speech or to a beat in music

allege – v. to state without definite proof that someone has done something wrong or illegal

*complement – n. a word or group of words added to a sentence to make it complete

Here are the patterns we covered in this story:

Can you think of any other common verb patterns having to do with crime? We want to hear from you. Write to us in the Comments Section.