< COVID, Working Conditions Likely Cause Worldwide Nursing Shortage
Update Required To play the media you will need to either update your browser to a recent version or update your Flash plugin.
By Susan Shand
29 April 2021


The International Council of Nurses, or ICN, warned Thursday that the world is facing a nursing crisis. In the next few years, the organization said the worldwide workforce of 27 million nurses could be reduced by up to 50 percent.

The organization said that nursing groups in 64 nations reported unhappiness over pay and working conditions. The groups said violence and threats also caused nurses to leave their profession. 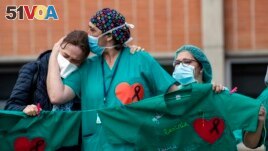 Health workers comfort each other during a memorial for a co-worker who died of COVID-19, at the Severo Ochoa Hospital, in Leganes, Spain, April 10, 2020.

There is also the COVID-19 effect. The organization said these difficult conditions were having a great effect on the mental health of nurses around the world.

ICN leader Howard Catton said politicians and leaders have recognized the importance of nurses in healthcare. But nurses are still not being paid comparatively.

"And that, I think is very much also at the heart of the discontent, the unhappiness, some of the actions that we are seeing from nurses around the world," he said.

Strikes over nurses' pay and working conditions have broken out in Zimbabwe, Lebanon, Northern Ireland, the United States and other countries. The ICN said strikes, growing unhappiness and concerns over protection at work were causing people to be less interested in a nursing career.

Catton also said that the interruption in nurses' education during the pandemic has resulted in a six-to-12-month delay for new nurses coming into the profession.

These issues will cause problems for "both recruitment to the nursing profession and the retention of those nurses we already have," he said.

These problems exist throughout the world, but are greater in low- and middle-income countries. In the report, ICN noted many nurses are leaving developing countries to go to richer countries, where pay and conditions are better.

Meanwhile, richer countries are actively seeking to bring nurses in from poorer countries to reduce their own shortages, the ICN report said.

VOA's Lisa Schlein reported this story. Susan Shand adapted it for Learning English. Hai Do was the editor.

nurse – n. a person who is trained to care for sick or injured people and who usually works in a hospital or doctor's office

discontent – n. a feeling of unhappiness or disapproval

recruitment - n. to find suitable people and get them to join a company, an organization, the armed forces

retention – n. the act of keeping someone or something