< COVID-19 Creates US Shortage of Teachers, School Workers
Update Required To play the media you will need to either update your browser to a recent version or update your Flash plugin.
By Dan Novak
28 September 2021


Schools in the United States are welcoming back students to classrooms this autumn. But they are facing a new problem: a shortage of teachers and school workers.

Districts have faced shortages before, but many now say it is the worst it has ever been.

The country's public schools have struggled for years with teacher shortages, especially in math, science, special education and languages. But the COVID-19 crisis has worsened the problem. The pandemic has led to an increase in retirements and resignations.

Districts across the country are reporting teacher shortages. In South Dakota, one district started the school year with 120 unfilled teacher positions. Across Texas, the main districts in the cities of Houston and Waco reported hundreds of teacher openings at the start of the year.

Many schools across the country have had to close classrooms because of a lack of teachers.

In Michigan, Eastpointe Community Schools moved its middle school back to online learning last week because it does not have enough teachers. The small district north of Detroit has 43 positions open — one quarter of its teachers.

"This is obviously not ideal, but we're able to make sure they're getting each subject area from a teacher certified to teach it," Kienitz said.

The National Education Association surveyed 2,690 educators in June. Thirty-two percent said the pandemic drove them to leave teaching earlier than expected. Another survey by the Rand Corporation found that teachers had high levels of stress and were three times more likely than adults in other professions to experience depression.

This is the worst "shortage of labor we have ever had," said assistant superintendent Tony Wold. "We opened this year with 50 ... teaching positions open. That means students are going to 50 classrooms that do not have a permanent teacher."

There are 100 more openings for aides who help teach English learners and special needs students. There is also a shortage of cleaners, food services workers and others, Wold said. 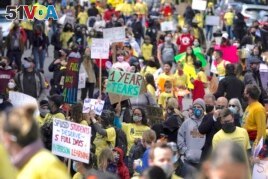 In this March 13, 2021, file photo, parents, students, teachers and supporters march during a rally for San Francisco public schools to reopen during the coronavirus pandemic in San Francisco. (AP Photo/Jeff Chiu, File)

Money is not the main problem. School districts have the money to employ more teachers and workers, thanks to billions of dollars in federal and state pandemic relief assistance. There are just not enough people looking for work.

Mike Ghelber is the assistant superintendent at the Morongo Unified School District in southern California. "We're all competing for a shrinking piece of the pie. I don't know if everybody is getting snatched up, or if they don't want to teach" during COVID, he said.

The Morongo school district of 8,000 students has put job advertisements in newspapers, radio and social media. Teachers have also put "now hiring" messages into their students' lunch containers. The messages include a list of openings.

Class sizes are also getting bigger.

Mount Diablo Unified School District serves 28,000 students near San Francisco, California. It has had to fill several elementary school classrooms at 32 students, the most students there can be.

Of the 12 officials interviewed by The Associated Press in California districts, only one said it was not facing shortages.

"We probably would have experienced the same shortages as others," said Long Beach assistant superintendent David Zaid. "But we became much more assertive, and as a result, we are not in the same position."

Jocelyn Gecker reported this story for The Associated Press. Dan Novak adapted it for VOA Learning English. Ashley Thompson was the editor.

district — n. an area established by a government for official government business

survey — n. an activity in which many people are asked a question or a series of questions in order to gather information about what most people do or think about something

stress — n. a state of mental tension and worry caused by problems in your life, work, etc.

depression — n. a serious medical condition in which a person feels very sad, hopeless, and unimportant and often is unable to live in a normal way

snatch — v. to take (something) quickly or eagerly

enrollment — n. a policy or process by which parents may send their children to a different public school than the one in their own community