< Could the US Regulate What Americans Eat?
Update Required To play the media you will need to either update your browser to a recent version or update your Flash plugin.
By Dan Novak
06 September 2021


Nine out of 10 American adults have unhealthy metabolisms, mostly because of the food they eat. Experts say it might be time for the government to regulate what Americans put in their mouths.

Dariush Mozaffarian is a heart doctor at Tufts University in Massachusetts. He said the food industry is the only area of the economy "where we have the majority of products being knowingly dangerous, and we leave it up" to the public to decide what to have.

If there is a product that hurts people, "we get rid of it," Mozaffarian said. 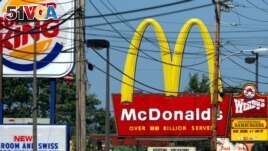 To look at someone's metabolic health, doctors measure things like blood sugar, cholesterol and blood pressure. People who are in poor metabolic health are at increased risk of getting diabetes, heart disease and other serious health problems.

"When you have nine out of 10 adults being metabolically unhealthy, largely due to diet-related illnesses, you know we have a broken system," Mozaffarian said.

A big part of the problem is that Americans eat a lot of junk food. Junk foods are processed foods like sweets or potato chips that provide little nutritional value and are high in fat, salt and sugar. A study by the National Institutes of Health found that junk foods account for 1 out every 7 calories in adults and 1 out of every 5 calories in children.

Junk foods are hard to resist because they contain things the body wants and needs.

Sweet, salty and fatty foods "are things that are very necessary to live, they're energy providing," said Linda Bartoshuk. She is a professor of food science at the University of Florida.

The problem, she said, is that the body has a hard time knowing when to stop wanting them.

"We take in too much salt, too much sugar, too much fat, and it produces all kinds of illnesses," Bartoshuk said.

Mozaffarian is among health experts who are calling for more policies to help Americans eat healthier foods.

He would like to see the federal government improve nutrition in existing food programs, like the Supplemental Nutrition Assistance Program (SNAP) and Meals on Wheels. SNAP provides financial aid to poor families to buy food, and Meals on Wheels delivers meals to older Americans.

Mozaffarian also thinks food nutrition should be included in the health care system. Even though Americans are getting less healthy, the United States spent $3.8 trillion on health care in 2019.

Doctors, for example, could write prescriptions for healthy foods that are partially or fully paid for, Mozaffarian said. He also thinks there could be more nutritional education for health care workers, and students in medical school.

And while Mozaffarian believes nutritional education would be effective, changing Americans' diet is most important, he said.

"We're going to need to fix the food, right, so that parents and kids who are busy and out wanting to enjoy their lives can get nutritious, affordable food," he said.

Dora Mekouar reported this story for Voice of America. Dan Novak adapted it for VOA Learning English. Susan Shand was the editor.

metabolism — n. the chemical processes by which a plant or an animal uses food, water, etc., to grow and heal and to make energy

regulate — n. to make rules or laws that control (something)

cholesterol — n. a substance that is found in the bodies of people and animals

nutrition — n. the process of eating the right kind of food so you can grow properly and be healthy

calorie — n. a unit of heat used to indicate the amount of energy that foods will produce in the human body

afford — v. to be able to pay for (something)

prescription — n. a written message from a doctor that officially tells someone to use a medicine, therapy, etc.