< Costa Rica Priest Sings Public Health Message During Pandemic
Update Required To play the media you will need to either update your browser to a recent version or update your Flash plugin.
By Gregory Stachel
08 May 2021


A Catholic priest is winning new fans in Costa Rica with a COVID-19 song set to the music of salsa.

Sergio Valverde is best known for his aid to the poor in the Central American country. For the last few Sundays, Valverde has performed his song with a dance in front of Cristo Rey church in San Jose. His aim is to get people to wear protective face coverings, or masks, and continue being careful during the pandemic.

"Without the mask, there's COVID for you, COVID for me," he sang. The words are set to the music of the song Sopa de Caracol, or Snail Soup in English. The song performed by Honduran group Banda Blanca was very popular in 1991.

Valverde said he had not even written down the lyrics, or words, of his version of the song. He said he was putting the words together as he sang. He was surprised to see how popular it became on social media. 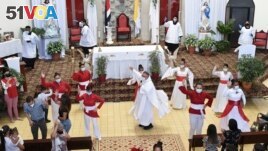 Sergio Valverde Espinoza, a Catholic priest of the Cristo Rey church who modified a popular song called "Sopa de Caracol," or Snail Soup in English, sings and dances during a Mass in San Jose, Costa Rica, Sunday, May 2, 2021.

The Catholic priest said, "the issue of COVID is affecting the entire world, there's pain, there's suffering." He continued, "I, as a priest, see so many people suffering, sick, in pain, people without work and who are dying of hunger and I wanted to help a little."

Valverde could not have timed it any better. Costa Rica had a record of more than 2,700 new infections in one day recently. The intensive care area of its public hospitals are 95 percent full. The country has recorded more than 3,200 COVID-19 deaths in total.

Valverde is known for his work with children left on the streets and giving food to the poor. He said he is seeing more in need than ever before during the economic crisis which was worsened by the pandemic.

Valverde admitted that he has enjoyed the experience. He said, "the whole world is so crazy that they looked for another nut."

Javier Cordoba reported this story for the Associated Press. Gregory Stachel adapted it for VOA Learning English. Hai Do was the editor.

church – n. a building for public and especially Christian worship

priest– n. clergy or a person who has the authority to lead or perform ceremonies in some religions and especially in some Christian religions

snail– n. a small animal that lives in a shell that it carries on its back, that moves very slowly, and that can live in water or on land