< Coronavirus Spreads in Nagorno-Karabakh as Fighting Continues
Update Required To play the media you will need to either update your browser to a recent version or update your Flash plugin.
By Susan Shand
23 October 2020


People who are sick with the coronavirus fill cold basements with the healthy to hide from artillery fire. The local health minister who has the virus keeps working. He has a higher than normal body temperature and is also sick with pneumonia. Doctors with the virus perform operations on the wounded.

These are the sad realities of the COVID-19 pandemic in Nagorno-Karabakh, an area of the South Caucasus mountains where Armenian and Azerbaijani forces have been fighting.

"We just don't have time to think about coronavirus," said Irina Musaelyan, who was sheltering with neighbors. She lives in Stepanakert, the main city in the separatist area. 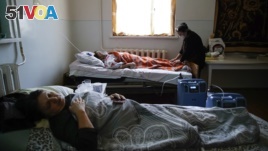 Coronavirus patients lie in an infectious diseases clinic in Stepanakert in the separatist region of Nagorno-Karabakh, Tuesday, Oct. 20, 2020.

Nagorno-Karabakh lies within Azerbaijan but has been under the control of ethnic Armenian forces for more than 25 years. Those forces receive support from the government in Armenia.

The area is facing the largest escalation of fighting since a war there ended in 1994. Hundreds have been killed since the clashes started on September 27. Two attempts at ceasefires have failed.

Health care workers have been hit hard by the virus.

"Almost everyone got infected. Some had it in a light form and others in a more serious one," said Malvina Badalyan, talking about health care workers. He is a doctor and head of the infectious disease center in Stepanakert.

In the middle of a war, with the wounded crowding into hospitals, medical teams keep working.

"Many doctors and nurses knew that they were infected, but they kept mum about it," said Ararat Ohanjanyan. He is the health minister for Nagorno-Karabakh's government. "They may lie down...to bring the fever down and then get up and continue to perform operations."

"No one has the right now to step aside," he added.

When the latest fighting started, medical workers did not have the time or equipment to fight the virus, Ohanjanyan said.

"Stepanakert came under heavy shelling, and it allowed contagion to spread," he added.

Ohanjanyan also has the virus and he, too, has continued working with both a fever and pneumonia.

In the past week, the shelling of Stepanakert has become less intense. Emergency health workers have been able to visit shelters and basements to find the sick, Ohanjanyan said. He added that regular testing has begun again, and the sick are being put in quarantine.

Patients in the most serious condition have been sent to Armenia.

Ohanjanyan said local officials still do not know how many people are infected.

Armenia supports the separatist area through a land corridor. The country has also reported a large increase in cases in recent weeks. The average of daily new infections has increased 200 percent since early October.

As Nagorno-Karabakh's medical system faced these problems, health workers and other people volunteered to bring medicine to those sheltering in basements and to find those who are sick.

Aram Gregorian, a doctor and volunteer, said the conditions in shelters helped fuel the spread of the virus.

The attacks force people into groups in basements, he explained, adding that those who clearly have the virus "can't get treatment or go to the hospital."

basement – n. the area underneath a house

pneumonia – n. an illness caused by inflammation of the lungs

pandemic – n. a contagious disease that travels to many countries

escalation – n. the act of increasing, getting better or worse

contact tracing - n. a public health measure that follows the many contacts of a single sick person

contagion – n. a disease that spreads

quarantine – v. the act of isolating someone with a contagious disease

corridor – n. a hallway, or pathway