< Coronavirus Crisis Pushes Start of Holiday Shopping Earlier
Update Required To play the media you will need to either update your browser to a recent version or update your Flash plugin.
By Susan Shand
11 October 2020


The world has changed in many ways since the coronavirus pandemic struck. Now, you can add end-of-the-year holiday shopping to the list of time-honored traditions being affected.

Many retail businesses are launching the holiday shopping season earlier than ever this year. They hope to keep large crowds out of stores and avoid problems when shipping products in November and December.

American retail stores like Best Buy, Macy's, and Target often offer their biggest deals on "Black Friday." That is the day after the American observance of Thanksgiving in late November. Now, retailers are planning to start offering deals this month.

With more people expected to buy products online, retailers are trying to avoid getting a lot of orders in mid-December just before Christmas. That could lead to late gift arrivals and higher shipping costs.

Many stores could not keep up with demand when Americans were locked down in their homes during the early days of the pandemic. Online retailer Amazon had to add 175,000 workers to meet demand for products on its website.

Black Friday has long been the unofficial start to the holiday season in the United States. However, retailers have been trying to get Americans to start holiday shopping earlier for the past 10 years or so.

This year, there seems to be a more reason urgent to start early. With the coronavirus still spreading across the country, stores have had to rethink their usual holiday plans. Thanksgiving Day specials are canceled. There will still be in-store sales the day after Thanksgiving, but companies are expected to direct shoppers to go online to avoid crowds and other problems.

"We're preparing for a holiday season unlike any we've seen before," said Target's chief Brian Cornell.

Many people are out of work, and even more people are unsure about their economic futures. This probably will not be a great year for holiday shopping. Most people will probably buy fewer things because they will not be traveling to family gatherings.

Shoppers will also be looking at gifts related to activities around the home, such as physical workout gear and gaming systems.

"Shoppers are going to be very selective in what they buy," said Ken Perkins. He is president of Retail Metrics, a retail research company. He added that retail stores "are fighting for their lives." 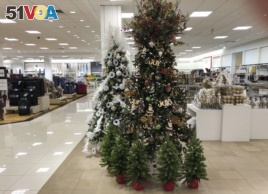 A display of Christmas trees stands next to holiday knick-knacks on display in a Macy's department store Thursday, Oct. 1, 2020, in northeast Denver.

The first big holiday push will come from Amazon. The company has announced that its well-known yearly sale, called Prime Day, will be in October. This is the first time Amazon has held Prime Day so near the holidays. It is usually held in July, but was postponed this year.

The move will force other businesses to offer sales around the same time, too. Target and Walmart have already said they will hold their own sales during the same time as Amazon's. Electronics retailer Best Buy will offer deals in October, earlier than it ever has.

Even with the early start to the season, no one knows if people will shop or hold onto their money.

Joel Bines, an expert on retail sales at AlixPartners, thinks the idea of earlier shopping will continue, even when the pandemic finally ends.

"This is here to stay," Bines said. "The new holiday season is October through January."

There are already signs of early shopping. Kohl's said shoppers have started searching for traditional Christmas gifts on its website.

Retailers are making plans for people who do not want to go to the store at all.

Expecting to sell more of its jewelry online, the Signet Jewelers changed its Ohio storage center so it can ship five times as many packages as last year. The company owns several retail jewelry stores.

Shipping company DHL is telling retailers to avoid holding big sales in December because delivery could be delayed, said Kraig Foreman. He is the company's president of e-commerce in North America.

″I don't want to let customers down in a year where we need more joy than ever," he said.

pandemic – n. a contagious diseases in many countries

shop – v. to go to stores or online to buy things for pleasure

retail – n. a store or website that sells things to the public

locked down – n. closing down society to avoid disease

selective – adj. preferring or choosing one over another

package – n. an item that is put in a box to be delivered

delivery - n. bringing an item or letter to someone's home or office