< Coronavirus Crisis Creates Changes in China's Food Supply Chain
Update Required To play the media you will need to either update your browser to a recent version or update your Flash plugin.
By John Russell
20 June 2021


China produces far more vegetables than any other country in the world. It has used greenhouses, special buildings for growing plants, for many years. But food supply problems created by coronavirus restrictions have sped the development of high-tech glass greenhouses in the country.

At Chongming Island near Shanghai, China's most populous city, workers collect tomatoes and cucumbers inside a new, glass greenhouse. The Dutch company FoodVentures operates the greenhouse. It began harvesting vegetables in May. 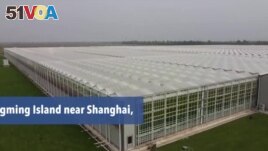 The greenhouse is one of many appearing near China's very large cities. These new structures use high-end technology to control water flow, temperature and lighting systems. The greenhouses grow vegetables within easy reach of a large and increasingly wealthy base of buyers.

Dirk Aleven is director of FoodVentures. Aleven noted the increase in demand for fresh food since the beginning of the coronavirus crisis. He told Reuters that in the past, fresh vegetables "were transported for thousands of kilometers, even within the borders of China."

"It is even more important now that fresh produce is produced at the spot where it's consumed," Aleven said.

Historically, China's vegetable production took place in a few areas and required a complex transport system to get the produce to markets in big cities.

Built in or near cities to reduce distance to buyers, the new, high-tech greenhouses are usually cooperative businesses. Chinese companies work with greenhouse companies from the Netherlands, a leader in agriculture technology. The greenhouse near Shanghai is one co-op example.

Growth and the future

Greenhouses made of glass have seen an especially large increase in use.

Greenhouse developers note that a growing number of wealthy Chinese seek better food produced with less chemical use. They are supporting the expanding greenhouse industry, the developers say.

Lim noted that Chinese people are "buying more of their groceries online, and spending more on healthier choices" from food producers they trust.

Xu Dan, CEO of greenhouse operator Beijing HortiPolaris, said China could face some difficulties as it changes its farming and food supply system.

"The biggest challenges are people, people who have the knowledge to manage greenhouses to produce quality vegetables," he said. Xu added, "Most farmers are getting old and their way of production (is) also out of date, replacing such (a) big amount of farmers is really a big challenge."

Emily Chow, Sophie Yu and Dominique Patton reported on this story for Reuters. John Russell adapted it for Learning English. Caty Weaver was the editor.

consume -- v. to eat or drink (something)

shortage – n. a state in which there is not enough of something that is needed

sustainability -- n. involving methods that do not completely use up or destroy natural resources

groceries – n. plural food sold by a grocer : food bought at a store