< Coronavirus Changes South Korean’s Thanksgiving Traditions
Update Required To play the media you will need to either update your browser to a recent version or update your Flash plugin.
By Ashley Thompson
29 September 2020


The coronavirus forced 84-year-old Chung Seong-ran to do something new to celebrate South Korea's Thanksgiving holiday.

This year, her daughter will not come to visit her during the holiday, which is called Chuseok. Instead, Chung sent a video message to her daughter for the first time in her life. A government worker helped her learn how.

"Please, always wear masks and be vigilant! Mommy is eating well and doing fine at home. I only worry about you. I love you," Chung said in the 15-second video. 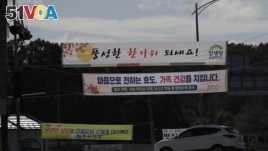 The Chuseok autumn holiday begins September 30. This year, many South Koreans are observing it differently than in past years.

Usually, millions of people travel to visit their hometowns. But health officials have for weeks urged people not to travel during the three-day holiday. They say that increased movement could spread the virus and threaten South Korea's gains against COVID-19.

A rise in cases in the Seoul area in mid-August and September forced officials to strengthen social distancing and other measures. The 38 new cases reported Tuesday were South Korea's lowest daily increase in about 50 days.

"We'd like to ask everyone to build family bonds and say hello to each other in a non-contact manner during this year's Chuseok for the safety of your families and all of us," Health Minister Park Neung-hoo said at a recent virus meeting. "We can have video calls with each other or use video conferencing for family gatherings."

It is unclear how much Chuseok celebrations might affect South Korea's outbreak.

Recent opinion studies of people living in the wider Seoul area showed that most are not planning to visit family. But tens of thousands of tourists are expected to visit the southern vacation island of Jeju. About 95 percent of the rooms at six major hotels on the east coast are already full, tourism officials say.

The government's anti-virus measures during this year's Chuseok include a ban on eating at restaurants at highway rest areas. The government also has put plastic barriers at outdoor tables there.

It also will charge people money who are driving on national expressways. The charges are usually suspended during the holiday.

In many rural areas, large signs calling for fewer family gatherings during Chuseok have been hung along streets. A sign in the central city of Cheongju reads, "Let's mark this Chuseok with online pilgrimages to ancestral graves and the sending of heartfelt gifts."

In the southeastern town of Uiseong where Chung lives, workers were sent to help hundreds of older people record and send video greetings to family members in far-away places. Many live alone and most do not have smartphones. So, the workers used their phones to take videos and send messages to their loved ones.

Kang Myoung Suk is Chung's daughter. She said that when she received her mother's message, she "felt really happy to see my mom on video as I had been only able to hear her voice on the phone."

The Associated Press reported this story. Ashley Thompson adapted it for VOA Learning English. Hai Do was the editor.

mask - n. a covering for your face or for part of your face

tourism - n. the activity of traveling to a place for pleasure

expressway - n. large highway that may be entered and left only at certain places

pilgrimige - n. a journey to a holy place

grave - n. a hole in the ground for burying a dead body