< Coronavirus Again Limits Ramadan Observation
Update Required To play the media you will need to either update your browser to a recent version or update your Flash plugin.
By Dan Novak
13 April 2021


Muslims around the world marked the start of Ramadan Tuesday. But a rise in COVID-19 cases has again placed limits on how they can observe the holy month.

Ramadan is traditionally marked by longer prayers in crowded mosques. Muslims do not eat or drink from morning to night. The custom is meant to stop unhealthy habits and to feel closer to God. At the end of the day, they meet with friends and family to eat a big feast, called the "iftar."

Last year, Islam's holiest month began during the start of the coronavirus pandemic. Many mosques have since reopened and restrictions have eased this year. However, crowded gatherings in mosques and large gatherings for meals remain banned.

Mecca in Saudi Arabia is home of the Kaaba, Islam's holiest site. Limited numbers of people were permitted inside the Great Mosque of Mecca on Tuesday, which houses the Kaaba. Other Muslims could only pray towards the Kaaba five times a day.

In Lebanon, plans for Ramadan had to change as the country faces the worst economic crisis in its history.

Samiyeh al-Turk was at a busy outdoor market in Beirut. "We cannot buy anything. We ask how much the lettuce is, the cucumber and the tomato," she said. "How we are going to get through the month of Ramadan? I don't know."

Israel has permitted 10,000 vaccinated Palestinians to pray in Jerusalem's Al-Aqsa mosque starting Friday. But a night time curfew in the crowded Gaza Strip restricted family gatherings as the virus continues to spread. 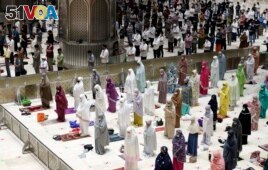 Curfews remain in Iraq throughout Ramadan. Business owners and shops could operate but only through home deliveries.

Vaccinations are a challenge for Muslim nations giving shots throughout Ramadan. There is an Islamic teaching that Muslims should not put anything in the body during Ramadan between sunrise and sunset.

But Indonesia's top religious leaders said that Muslims eligible for vaccinations are "required" to take the shots during Ramadan. Mosques are permitted to open for prayers with restrictions. People can hold iftar gatherings at 50 percent capacity.

Anna Mardyastuti lives in Indonesia's capital of Jakarta. "Easing restrictions is like a breath of fresh air for us who are tired by this COVID-19 outbreak," she said. "Yes, they should act to stop the virus, but not block the door to worship or change our tradition of Ramadan entirely."

Pakistan Prime Minister Imran Khan has refused to close mosques even as infections in the country rise to new highs. Mosque leaders are told not to let anyone older than 50 enter to pray, but the restrictions are rarely followed.

And in Egypt, the government prevented mosques from serving free meals during Ramadan. It also banned traditional iftars that would bring together large amounts of people at long tables.

Amr Nabil and Niniek Karmini reported this story for the Associated Press. Dan Novak adapted it for VOA Learning English. Hai Do was the editor.

mosque n. a building that is used for Muslim religious services

habit-n. a usual way of behaving : something that a person does often in a regular and repeated way

feast- n. a special meal with large amounts of food and drink

delivery-n. the act of taking something to a person or place

capacity-n. the ability to hold or contain people or things — usually singular

outbreak-n. a sudden start or increase of fighting or disease

worship-v. to honor or respect (someone or something) as a god

eligible –adj. able to be chosen for something : able to do or receive something