< Controlled Burns Seen as a Way to Reduce Large Forest Fires
Update Required To play the media you will need to either update your browser to a recent version or update your Flash plugin.
By John Russell
27 June 2021


In the 1950s, University of California professor Harold Biswell experimented with controlled burns in the state's forests. At the time, many people thought he was insane to do so.

Now, however, Biswell is seen not as insane but as someone whose research could ease wildfire dangers and save the forests of the American West. 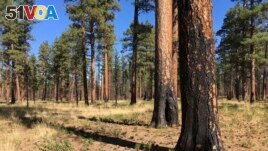 Large areas of forest have become overgrown in the American West. These lands have had wildfires that have damaged towns, forced large evacuations and covered the West Coast in thick smoke.

Last month, four U.S. senators proposed legislation called The National Prescribed Fire Act of 2021. It calls for federal officials to substantially increase the number and size of prescribed fires on federal lands. One of the bill's supporters, Senator Ron Wyden of Oregon, said the legislation would double the budget for controlled burns.

Yet the increase in prescribed burns has been slow. From 1995 through 2000, an average of 566,560 hectares were treated with prescribed fire each year.

That amount is far short of the 28 million hectares that in 2001 were in great need of fuel reduction to avoid serious wildfires, scientist David Carle wrote in his 2002 book "Burning Questions: America's Fight with Nature's Fire."

The latest prescribed burning plans face several problems. The periods between wildfire seasons when prescribed burning can happen safely are shrinking. Some forests are too overgrown to burn without thinning. And prescribed fires can fill nearby towns in smoke.

Tim Holschbach is deputy chief of policy and planning with Oregon's Department of Forestry.

"We have to be mindful of not pouring smoke into communities because that's a violation of the Clean Air Act," Holschbach said.

Prescribed burning has prevented disasters. In 2017, a wildfire threatened the town of Sisters, Oregon. But firefighters were able to control it because, months earlier, workers had removed trees and brush and then carried out prescribed burns.

"The fire came to a halt, both because it had less fuels and also because in the thinned, more natural forest, there was a lot more space for the firefighters," said Senator Jeff Merkley of Oregon. He leads the Senate Interior, Environment and Related Agencies Appropriations Subcommittee.

However, sometimes prescribed burns become uncontrollable. One of the most destructive burns happened in 2012. The Colorado State Forest Service did a 20-hectare prescribed burn near the small town of Conifer, southwest of Denver. The fire appeared to go out as expected. But, high winds brought it back to life.

Several people died in the fire, which burned 15.5 square kilometers and destroyed over twenty homes.

Scott Stephens, a professor of wildland fire science at the University of California, Berkeley, wants a big increase in prescribed burns. But Stephens predicts such burns will only slowly increase due to a lack of both trained workers and public support.

"Once you get areas treated, you have to come back in around 15 years for maintenance treatments. And this never ends," Stephens said. "This is a key point: The program has to last forever."

Andrew Selsky reported on this story for the Associated Press. John Russell adapted it for Learning English. Caty Weaver was the editor.

evacuation – n. The act of removing (someone) from a dangerous place

brush – n. a thick growth of small trees and shrubs