< Competitors Explain Beach Volleyball Clothing
Update Required To play the media you will need to either update your browser to a recent version or update your Flash plugin.
By Dan Friedell
27 July 2021


This week at the Tokyo Olympics, many people are thinking more about the kind of sports clothing, or uniforms, female athletes wear.

The clothing worn by Olympic gymnasts and by women who played in a beach handball competition in Europe gained attention this week.

In Europe, the Norwegian beach handball team wore close-fitting shorts: a kind of clothing for the lower part of the body. They were protesting having to wear bikini bottoms – or extremely short shorts. The women on the team were fined by the organization that supervises their sport in Europe.

In Tokyo, the German women's gymnastics team wore clothing that covered their legs to protest the way many young women in the sport are treated by men.

Those stories made people wonder if the women who play beach volleyball like to wear athletic clothing that looks like a swimsuit.

The athletes say they do not mind.

April Ross is a member of the USA women's beach volleyball team.

She said the sport started on beaches in California, Hawaii and Brazil. When people finished playing, they could go cool off in the ocean, so it made sense to wear swimsuits. 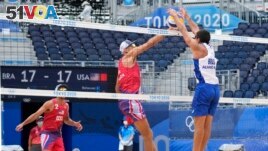 This image shows what men wear during the beach volleyball competition. The players are from the U.S. and Brazil, two countries that started the sport. (AP Photo/Petros Giannakouris)

Men who play beach volleyball at the Olympics wear swimsuits along with thin t-shirts without arms known as tank tops.

Since they are playing on sand, most players say they are happy to wear as little clothing as possible. When the sand gets into their clothing, it does not feel good against their skin.

Alix Klineman is Ross' volleyball teammate. She said: "I totally respect other people wanting to be more covered if that's what makes them more comfortable."

The beach volleyball games are played in all kinds of weather, even rain. At the 2008 Olympics in Beijing, Misty May-Treanor won the gold medal with her partner Kerri Walsh in a rainstorm.

"This is just another reason why we play in bathing suits," May-Treanor said at the time.

The volleyball players do not have to wear swimsuits, they just have to wear the same thing. They can wear long sleeves or long, tight pants, known as leggings if it is cold. They can also wear head coverings for religious reasons.

The FIVB is the organization that supervises beach volleyball at the Olympics. It says there are several choices.

The organization said: "Beach volleyball welcomes all, and these uniform regulations ensure that our sport is culturally and religiously inclusive."

Doaa Elghobashy is a member of the Egyptian beach volleyball team. She keeps her body covered with loose clothing and wears a hijab, a Muslim head covering.

"It doesn't keep me away from the things I love to do," she said. "And beach volleyball is one of them."

Jimmy Golen wrote this story for the Associated Press. Dan Friedell adapted it for Learning English. Mario Ritter, Jr. was the editor.

What would you wear while playing volleyball at the beach? Tell us in the Comments Section and visit 51VOA.COM.

athlete –n. a person who is trained in or good at sports, games, or exercises that require physical skill and strength

uniform –n. a special kind of clothing worn by all members of a group, organization or team

bikini –n. a piece of clothing in two parts worn by women for swimming and lying in the sun that does not cover much of the body

gymnast –n. a person who perform exercises on a flat area or with equipment as part of a sports competition that is judged

comfortable –adj. not having any physical unpleasant feelings; experiencing physical ease or comfort

bathing suits – n. another word for a swimsuit