< Companies Worry about Risks as Earth Orbit Gets Crowded
Update Required To play the media you will need to either update your browser to a recent version or update your Flash plugin.
By John Russell
06 September 2021


An increasing amount of space debris is threatening satellites orbiting Earth. The situation is worrying companies that insure against losses during space travel.

Thousands of new satellites are being launched into areas where debris has been building up since space flight began.

Experts and business leaders recently told the Reuters news agency that the increased risks of objects crashing into each other concerns insurers. They said the small number of insurers that offer satellite insurance are pulling back or leaving the market.

Richard Parker is co-founder of Assure Space, a part of AmTrust Financial. Parker described the problem as "a real issue for insurance."

Over a year ago, the company stopped providing spacecraft insurance in the Low Earth Orbit (LEO), the area where most satellites operate. The few policies it has sold since then do not cover crashes with debris, also known as collision coverage.

"It may start to get difficult to get that type of coverage in the near future as more insurers realize that this is a significant risk that we can't even get our arms around," Parker told Reuters. 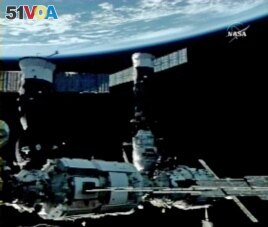 In this image from NASA Television, Earth is the background as the International Space Station is seen during a space walk by Cosmonauts Fyodor Yurchikhin and Oleg Kotov

Significant is a term that means large or important.

There are 8,055 satellites orbiting Earth. But 42 percent of them are inactive. That information comes from Seradata, a space marketing group. Most of these satellites operate in the LEO area, which goes up to 2,000 kilometers above Earth.

The number of active satellites has jumped 68 percent from a year ago. And it has increased by more than 200 percent from five years ago.

Much of the new activity has come from businessman Elon Musk's SpaceX company, as it grows its Starlink network of satellites.

SpaceX did not answer requests for comment. As a privately held company, it does not publicly share whether its satellites are insured.

Insurance companies say that other major companies, including Google, Apple and Amazon, also use satellites to send data. So do telecommunications providers, government agencies and universities working on space research.

The insurance issue is part of a larger problem: no one is cleaning up debris in space.

Government agencies follow thousands of pieces of debris, including inside a "graveyard orbit" where old satellites are sent to die with their last bits of fuel.

About half of new satellite launches now have insurance, said Denis Bousquet, an official with insurance company AXA XL's space business. People in the industry expect more policies to not include collision coverage and fewer satellites to have insurance.

Charles Wetton of insurer Global Aerospace said, "The concentrations of debris and increasing numbers of satellites being deployed are increasing the potential for collision."

Potential is a term that means possibility or capability of becoming real.

Seradata said only 11 spacecraft have suffered a partial or total failure because of suspected debris strikes over the past 10 years. But, because insurers predict risks over the life of current and future policies, space insurers worry about problems in the years ahead.

Wetton noted the possibility of a "Kessler effect," named for NASA space debris expert Don Kessler who developed the idea in 1978. It suggests that LEO could become so crowded that there is a large increase in the possibility of collisions.

There are no signs such a situation will happen soon, Wetton said. But the "Kessler effect" could make some orbits uninsurable.

Assure Space's Parker said he is sure a large collision will take place within the next three years. He said it would make insurance nearly impossible to get.

Noor Zainab Hussain and Carolyn Cohn reported on this story for Reuters. John Russell adapted it for Learning English. Mario Ritter, Jr. was the editor.

debris – n. things (such as broken pieces and old objects) that have been left somewhere because they are not wanted

insure –v. to providing insurance - an agreement in which a person makes regular payments to a company and the company promises to pay money equal to the value of something (such as a house or car) if it is damaged, lost, or stolen

type –n. a particular kind or group of things

graveyard – n. a place where old things are left or thrown away

concentration – n. a large amount of something in one place