< Cold-Weather Virus Surprises Doctors, Worries Parents
Update Required To play the media you will need to either update your browser to a recent version or update your Flash plugin.
By Ashley Thompson
15 July 2021


A virus that usually sickens children during cold weather months has surprised doctors and put many babies in the hospital in the United States.

The virus is called RSV, or respiratory syncytial virus. It is a common sickness that is like the common cold. But the virus can also cause severe sickness in babies and old people. Cases of RSV dropped sharply last year, when people mostly stayed at home and avoided busy areas during the COVID-19 health crisis. 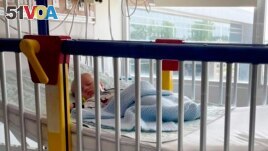 In this June 2021 photo provided by LaRanda St. John, her 6-week-old son, Beau, lies in a hospital bed at the Sarah Bush Lincoln Health Center in Matoon, Illinois. (LaRanda St. John via AP)

"I've never seen anything like this before," said Dr. Kate Dutkiewicz. She is medical director at Beacon Children's Hospital in South Bend, Indiana. "I've never seen cases in July, or close to July,'' she added.

She recently treated two babies who were infected with RSV. Both needed oxygen treatment to help them breathe.

The U.S. Centers for Disease Control and Prevention released a health advisory on June 10. It warned of an increase in RSV cases across parts of the southern United States. Cases have appeared in other areas, too.

LaRanda St. John became worried when her 6-week-old son, Beau, developed a bad cough. She suspected RSV when she saw that he seemed to be struggling to breathe easily.

"The doctors' office couldn't get me in because they were flooded with people calling" about children with similar symptoms, St. John said.

A medical test at the hospital confirmed Beau had RSV. The baby developed an above normal heart rate and had to be hospitalized overnight. His 16-month-old sister, Lulabelle, also got the virus but was not as sick and did not need to go to the hospital.

St. John said at first she thought her children might have COVID-19 because it is the wrong season for RSV. "I can't say I was relieved, because I know RSV is just as bad," she said.

In the United States, RSV leads to 2 million doctor visits each year, 58,000 hospitalizations and up to 500 deaths in children under the age of five. That is higher than the estimated number of children affected by COVID-19.

Cases in children and adults usually develop in the autumn through early spring. Off-season cases of RSV reported in Australia were a sign that the same might happen in the United States, said Dr. Larry Kociolek. He is an infectious disease specialist with Lurie Children's Hospital in Chicago.

Babies are usually exposed to RSV during the first year of life. Often older children in the family become infected at school and bring the virus home, Kociolek said. Because of stay-at-home orders and social distancing during the pandemic, young babies and children were not exposed to the virus as much as usual last autumn and winter.

"That just leaves a much larger proportion of susceptible infants," Kociolek said.

In infants, signs of RSV may include increased crying, poor feeding, a high body temperature and a lack of energy.

In infants and in babies born earlier than expected, the virus can cause small airways in the lungs to expand and fill up with thick fluid. Babies who develop this condition, called bronchiolitis, may require hospitalization and oxygen treatment.

Kociolek said the recent rise in cases during summer months could be partly the result of more testing because of COVID-19 fears. In normal times, parents may dismiss RSV signs as nothing especially serious. But now, parents fear their children could have COVID-19

Lindsey Tanner reported this story for the Associated Press. Ashley Thompson adapted it for VOA Learning English. Mario Ritter, Jr. was the editor.

cough -–n. to force air through you throat with a short loud noise because you are sick

symptom –n. a change in the body or mind that shows that a disease is present

expose –v. to be affected by something; to experience something

proportion –n. the relationship between the size, number or amount of two or more things

susceptible –adj. easily affected, influenced, or harmed by something