< Climate Change Pushes Vietnam’s Rice Growers to Farm Shrimp
Update Required To play the media you will need to either update your browser to a recent version or update your Flash plugin.
By Alice Bryant
09 May 2021


Farmer Ta Thi Thanh Thuy worked hard for years to grow rice on her small piece of land near the mouth of the Mekong River in Vietnam. But now Thuy has started farming shrimp. Many of her neighbors over the last 10 years have done the same.

In the past, such a change was unlikely. However, the effects of climate change are making rice-growing in her area more difficult. Seawater has brought higher salt levels to the Mekong River Delta area.

Officials hope the move toward shrimp farming will improve the country's seafood industry. The government has set the high goal of increasing shrimp exports by more than 100 percent to $10 billion by 2025. Local governments are giving farmers training and some assistance, including loans with good terms. 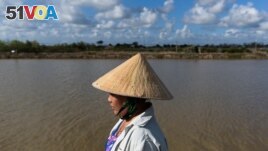 Ta Thi Thanh Thuy, 52, walks past the place where she used to grow rice before her family switched to shrimps farming in Soc Trang province, Vietnam, May 1, 2021. Picture Taken May 1, 2021. REUTERS/Thanh Hue

"Life was very hard for us until we began to farm shrimp," Thuy told Reuters news agency. The 52-year-old farmer also said, "Many shrimp farmers around here have been able to build nice houses and open saving accounts at banks."

"We planted rice but we harvested no rice," said Ta Thanh Long, another shrimp farmer. "There was a time the rice could still grow when the water was still fresh. But then the water became more and more salty each year."

At least one-third of the rice farming area along the 72-kilometer coastline of Soc Trang Province has been affected by seawater in recent years. That information comes from Duong Minh Hoang. He is the former director of the province's Agriculture Promotion Center.

Hoang said the center has urged people to farm things that will grow in salty water. He said climate change is affecting everyone, so they have to try new things to survive.

Vietnam is the world's third largest exporter of rice. But earnings from shrimp exports have risen above those from rice since 2013. And they continue to grow.

"Seafood processors around here come to buy up all the shrimp we farm," said Ta Thanh Tung, who is 44 years old. He is one of Thuy's five siblings who have all moved from rice to shrimp farming.

"We heard they're exporting the shrimp to Europe, China and the United States," he said.

Industry experts say exports will rise by five to 10 percent yearly over the next 10 years. Land used for shrimp farming is increasing by three to five percent a year.

Vietnam's largest seafood exporter is Minh Phu Seafood Corporation. It has the goal of turning the country into the world's largest shrimp exporter. The company expects trade agreements between Vietnam and other countries to help raise the country's exports to one quarter of the world's total by 2045.

That could help ease economic pressure that the Southeast Asian country will face in the years ahead. The World Bank estimates that climate change may lower Vietnam's national income by as much as 3.5 percent by 2050.

The change to shrimp from rice comes with its own set of environmental problems.

The International Union for Conservation of Nature estimates more than half of Vietnam's mangrove tree forests have been cleared to make space for shrimp farming. Mangroves protect coastal areas from soil loss and the effects of powerful storms.

And experts criticize the lack of government oversight of the new small shrimp farms. They have many questions including what the shrimp eat and what happens to the shrimp waste.

There are also concerns about the use of antibiotics to treat disease in farmed shrimp. Antibiotics can be found in shrimp waste. Waste is usually thrown back into surrounding waterways. This raises the risk of chemical pollution in nearby areas and harm to the food chain.

Matt Landos said these kinds of unseen pollutants are not discussed enough. He is an Australia-based animal medicine scientist. He told Reuters that pollutants "are present" at harmful levels in the area.

The increasing salt levels that led to shrimp farming could harm the mouth of the Mekong area in the long term.

A rise of 0.7 to one meter would put about 40 percent of the area underwater, said Le Anh Tuan. He teaches at the College of Environment and Natural Resources at Can Tho University.

The problem will continue and parts of the rice fields will have to become seafood farms, or grow fruit or other crops, Tuan added.

Shrimp farmers say they are already dealing with worrying signs that the water is getting saltier faster.

Thuy said it was harder to find fresh water now. "We are very concerned that because of rising seawater levels our farms will one day" be under water, Thuy added.

shrimp –n. a small shellfish that has a long body and legs that is commonly eaten as food

province –n. any one of the large parts that some countries are divided into and that have their own government

sibling –n. someone who is a brother or sister

oversight –n. the act or job of directing work that is to be done

food chain –n. a series of living things that uses lower member in the series as food and in this way are dependent on each other