< Climate Change Affecting Autumn’s Colors
Update Required To play the media you will need to either update your browser to a recent version or update your Flash plugin.
By Anna Matteo
05 October 2021


Leaf peeping is a beloved yearly activity in many parts of the world, including parts of the United States. The northeastern and mid-Atlantic states are especially popular for beautiful fall colors.

Leaf peeping is when people travel to see the beautiful colors of fall foliage. Foliage is another name for leaves, and fall is another word for autumn.

However, recent fall leaf peeping seasons have been changed by weather conditions.

A lack of rain causes leaves to turn brown and die before they can reach the best color. Heat waves cause leaves to fall before autumn even arrives. And extreme weather events, like hurricanes, take the leaves off trees altogether.

Climate change also creates longer-term threats that could harm leaf peeping. The spread of diseases and insects is also tied to warming temperatures. These are all affecting autumns famous fall colors.

Scientists say that this is likely to continue as the planet warms. Some of these scientists recently spoke with The Associated Press. 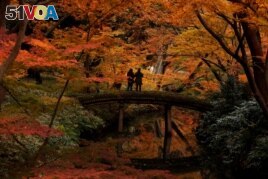 Typically, by the end of September, some leaves turn colors throughout the U.S. However this year, trees in many areas are still green.

For example, in northern Maine, the best time for leaf colors usually happens in late September. But on September 29, Maine forest officials had reported less than 70 percent color change of the leaves and only moderate leaf drop.

Across the country in Denver, Colorado, high temperatures have left "dead, dry edges of leaves" early in the season, said Michael Sundberg. He is a tree expert in the area. Sundberg told the AP that instead of slow change, trees are affected by abnormal weather.

"They change all of a sudden, or they drop leaves early," Sundberg said. "Its been a few years since we've had a really good leaf year ..."

The reason climate change can be bad for fall leaves has to do with plant biology. When fall arrives, days lengthen and temperatures drop. The chlorophyll in a leaf breaks down. And that causes the leaf to lose its green color. The green leaf turns into a beautiful yellow, red or orange autumn leaf.

Getting those beautiful colors requires a balance, said Paul Schaberg. He is a research plant physiologist with the U.S. Forest Service based in Burlington, Vermont. Warm fall temperatures, he said, can cause leaves to remain green longer.

Worse than that, Schaberg said, very dry summers can stress trees and cause their leaves to miss the fall colors completely. A 2003 study in the journal Tree Physiology that Schaberg co-wrote stated that "environmental stress" can speed up leaf decay.

That is happening already.

This summer's heatwave in the Pacific Northwest of the U.S. led to a condition called "foliage scorch."

Foliage scorch is when leaves brown too early, explained Chris Still. He is a professor at the Forest Ecosystems & Society department at Oregon State University. In some parts of Oregon, leaves lost their color early and then quickly fell to the ground. This led to a shorter and less beautiful leaf peeping season.

The economic impact of poor leaf peeping seasons could also be significant. Officials throughout New England have said fall tourism brings billions of dollars into those states every year.

Conservationists say that is one good reason to work to preserve forests and reduce the use of fossil fuels.

hurricane – n. a tropical cyclone with winds of 74 miles (119 kilometers) per hour or greater usually accompanied by rain, thunder, and lightning

chlorophyll – n. the green substance in plants that makes it possible for them to make food from carbon dioxide and water

physiologist – n. a person specializing in the biological study of the functions and processes of living organisms and their parts

stress – n. a force that tends to change the shape of an object

drought – n. a period of dryness especially when prolonged

scorch – v. to burn a surface of so as to change its color and texture

significant – adj. large enough to be noticed or have an effect