< City Gardening Expands in US During Pandemic
Update Required To play the media you will need to either update your browser to a recent version or update your Flash plugin.
By Alice Bryant
26 August 2021


On pieces of unused land in the Bronx, gardeners from many neighborhoods work together to make more than 12 farm hubs. The Bronx is an area in the northern part of New York City.

The gardeners are combining efforts for their community gardens and harvests.

Years ago, some found that, together, their small gardens could grow enough produce to make a lot of hot sauce. So, they shared harvests to create a product called Bronx Hot Sauce. Profits from the sales are reinvested in their communities.

Throughout the pandemic, the farm hubs of the Bronx have again proven their strength. They are producing leafy green vegetables and root crops like garlic, for example.

"The trick is: How can we learn from the pandemic so that we become [truly] resilient?" says Raymond Figueroa-Reyes. He is president of the New York City Community Garden Coalition.

The Bronx's farm hubs are part of an urban gardening movement across the country. The gardeners are seeking to empower their communities by urging them to grow their own food. When the pandemic hit, urban farming expanded widely and became highly productive. 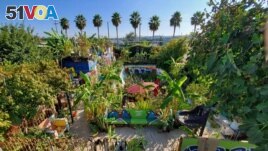 This photo provided by Lucky Atkare shows an urban garden in Los Angeles. Interest in gardening has grown around the country. And urban gardeners say it's particularly important for the health and resiliency of city neighborhoods. (Lucky Atkare via AP)

Many urban and rural areas in the U.S. have little access to healthy, fresh food. These areas usually have high rates of disease, such as high blood pressure and diabetes.

Millions of Americans live in neighborhoods without healthy food. And unhealthy fast food is everywhere. In cities, some community leaders use terms like "food prisons" to describe this lack of fresh food as part of deeper issues of race and equity.

Ron Finley of Los Angeles has been gardening in the city for several years. He says, "Growing your own food is like printing your own money." Finley runs the nonprofit organization Ron Finley Project. "It's not just about food, it's about freedom. It's our revolution," he told the Associated Press.

Finley grew up in South Central Los Angeles, where he says he had to drive 45 minutes just to get a fresh tomato. His efforts to rebuild communities through gardening include planting crops on deserted land.

Finley says fast-food restaurants are "killing more people in our communities" than guns.

"When you plant a seed," it will reproduce, he said. It's about currency. "It's a valuable resource. That's empowering. It's about more than food."

In the Bronx, Karen Washington has spent several years pushing urban farming forward. She helped organize the pepper-growing that led to Bronx Hot Sauce. The company they work with now also makes hot sauce with community-grown peppers from other U.S. cities.

"Healthy food is a human right, along with clean water," Washington said.

She is a member of the supervisory group from the New York Botanical Garden and has assisted neighbor-hoods in starting community gardens. Washington also has helped launch City Farms Market. It brings low-cost fresh fruits and vegetables to a weekly Bronx farmers' market.

Washington says COVID-19 made a lot of people want to grow their own food. "If we are going to fight viruses," she said, "we need to start eating healthy."

He said there is a great effort to organize more farm hubs and get the fresh food to where it is needed most.

Through its Bronx Green-Up program, or BGU, the New York Botanical Garden has long offered support to community gardens. When the pandemic hit, it organized online meetings to help solve issues. And BGU provided more than 10,000 small herb and vegetable plants.

Early in the pandemic, the program leaders realized "that food insecurity has always been a big issue in the Bronx," says Ursula Chanse. She is the program's director.

Hub – n. the central and most active part or place

Sauce – n. a thick liquid that is eaten with or on food to add flavor to it

Access – n. a way of being able to use or get something

Pepper – n. a hollow vegetable that is usually red, green, or yellow and that is eaten raw or cooked

Tomato – n. a round, soft, red fruit that is eaten raw or cooked and that is often used in salads, sandwiches and sauces

Currency – n. the money that a country uses

Herb – n. a plant or a part of a plant that is used as medicine or to give flavor to food