< Christmas Tree Buyers Find Lower Supply, Higher Prices
Update Required To play the media you will need to either update your browser to a recent version or update your Flash plugin.
By Dan Friedell
09 December 2021


Across the United States, people looking to buy real Christmas trees are either finding reduced choices, higher prices, or both.

The worldwide supply problem has also affected the number of artificial trees, like those made from plastic.

A combination of severe weather and difficulties getting trees from factories overseas caused what one industry expert called "a double whammy." This means that the situation is bad in two different ways. 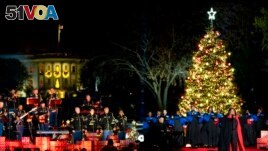 Heat and fires in the northwest U.S. in June hurt Christmas tree farms in Oregon and Washington. Those are the states where most of the trees come from.

It takes 10 years for most trees to grow. So, losing trees to fires and bad weather creates problems that may last for many years.

Even for the trees that do get cut down for sale, there are not enough truck drivers to bring them into city markets.

Dale Pine and Stacy Valenzuela run Crystal River Christmas Trees near Oakland, California. They normally get trees from Oregon, but a stretch of extremely hot temperatures damaged the crop.

Valenzuela called the situation "grim." She said she talked to suppliers every day to ask for trees. She said it has been "a lot of work to get these trees on the ground this year."

A Christmas tree market in Washington, D.C. brought out many customers who live in the area called Capitol Hill. The market, held in early December, was two streets away from the U.S. Capitol building.

Del Voss organized the sale as a way to raise money for a local community group. He charged about $75 for trees that were one meter tall. Most trees cost over $100.

He said he bought the trees at an auction in Pennsylvania about 10 days earlier. In the past, the group purchased trees from a small business that gets trees for community organizations to sell. But this year, that business had no trees available.

"He was unable to get his trees because of the shortage," Voss said.

Voss called the auction process where about 40,000 trees were for sale "chaotic."

He said he paid about $15,000 for 200 trees. That is two times more than what he usually pays. Other places in the area have less costly trees, he said, but the ones he sells provide money for the organization.

Most people, he said, were happy to pay a little more because the money went to a good cause. If they thought the price was too high, he told them where they could go to pay less.


"We don't want people to have bad feelings about buying a Christmas tree."

Voss said there are not as many trees this year because of the country's poor economic situation 12 years ago. When farmers took out loans to buy and plant young trees, banks did not offer them as much money. In turn, the farmers could not plant as many trees. There was also disease and bad weather that killed the young trees.

Voss said the supply is lower than normal this year -- but demand is higher. Many people are choosing to stay home for Christmas because of ongoing concerns about traveling during the COVID-19 pandemic. And they want their own tree to celebrate the holiday.

Caroline Tuan works for Balsam Hill, a company that makes artificial trees. She said her company's trees are made in China. She explained that slowdowns at the ports and a lack of truck drivers have made artificial trees 20 percent more expensive this year. In addition, there are not as many choices.

David Cruise went to the Balsam Hill store to buy an artificial tree this year. He decided it would be better for the environment to buy a tree that would last for a long time.

"This is really the way to go," he said.

Dan McPheeters lives in Washington, D.C. He came to the sale near the U.S. Capitol because places where he bought trees in the past were sold out.

"I grew up with an artificial tree. I think it makes all the sense in the world. But the kids seem to enjoy picking out a tree, and my wife really enjoys it. So, it's a nice family activity."

Dan Friedell wrote this story for Learning English with additional information from the Associated Press. Ashley Thompson was the editor.

Do you like to have a Christmas tree where you live? Tell us in the Comments section and visit 51VOA.COM.

auction – n. a public sale at which things are sold to the people who offer to pay the most

chaotic – adj. in a state of complete confusion or disorder

artificial – adj. not natural or real : made, produced, or done to seem like something natural

pick out – v. to choose or select (the best or most appropriate person or thing) from a group

customer– n. someone who buys goods or services from a business