< Children Suffer the Most in Israel-Hamas Conflict
Update Required To play the media you will need to either update your browser to a recent version or update your Flash plugin.
By Dan Novak
19 May 2021


Children are suffering severe trauma as Israel continues its bombing campaign against Hamas militants in the Gaza Strip.

Gaza health officials say at least 63 children are among the 217 Palestinians who have been killed in Gaza. The fighting between Israel and Hamas began on May 10.

On example is seven-year-old Suzy Ishkontana. She spent hours Sunday under the wreckage of her family home. Her brothers, sisters and mother died. Now she speaks or eats very little.

In Israel, 12 people have been killed by rockets fired by the militant group Hamas which rules Gaza. All but one of the people killed were civilians. One was a five-year-old boy.

For many children, it is trauma they have experienced for much of their lives. Israel and Hamas also fought wars in 2009, 2012 and 2014. Each time, Israel has launched heavy airstrikes in the small area where 2 million people live.

Israel says it does everything it can to prevent civilian deaths. Sometimes, Israel sends warnings to people to leave buildings that are about to be bombed.

Hamas has fired hundreds of rockets, but most are stopped by Israel's defense system. Israel also continues to bomb targets in Gaza.

The Ishkontana family was buried under their home early Sunday, after intense bombing of Gaza City. Israel said it was targeting a Hamas tunnel network. The strikes came without warning.

Riad Ishkontana said he was buried for five hours under a big piece of wreckage. He was unable to reach his wife and five children.

"I was listening to their voices beneath the rubble. I heard Dana and Zain calling, ‘Dad! Dad!' before their voices faded and then I realized they had died," he said, speaking about two of his children.

Suzy was brought to the hospital alive, the second-oldest of his three daughters and two sons. She was the only survivor.

The young girl was in "severe trauma and shock," said Dr. Zuhair Al-Jaro. He said the hospital could not get her the psychological treatment she needs because of the continued fighting.

"She has entered into a deep depression," Al-Jaro said.

The Ishkontanas were just one family destroyed that day. 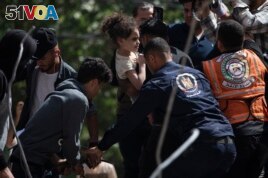 Suzy and her father Riad were the only survivors of their family after an Israeli airstrike destroyed one of the buildings they lived in in Gaza City early Sunday, killing her mother and four siblings. (AP Photo/Khalil Hamra, File)

The Israeli military said the strikes Sunday targeted Hamas tunnels under Gaza City. The strikes hit al-Wahda Street. Reports say it is one of the city's busiest streets and has many buildings where people live, and includes stores and restaurants.

Three buildings were destroyed, and many people from at least three families were killed. In all 42 people died, including 10 children and 16 women.

Lieutenant Colonel Jonathan Conricus is an Israeli military spokesman. He said the airstrikes caused a tunnel to collapse, bringing houses down with it. He said civilian deaths "were not the aim."

The Norwegian Refugee Council is a group that aims to help displaced people. It said 11 of the children killed in this war were involved in its program. One of the children was eight-year-old Dana, Suzy's sister.

The violence "will of course affect the psychology of these kids," he said. "We are expecting that ... the situation will be much worse and more children will need more support."

Jan Egeland is the council's secretary-general. He called for a cease-fire, saying, "Spare these children and their families. Stop bombing them now."

But in the longer term, he called for an end to the blockade on Gaza and the occupation of Palestinian territory. It is necessary "if we are to avoid more trauma and death among children," he said.

Fare Akram reported this story for The Associated Press. Dan Novak adapted it for VOA Learning English. Mario Ritter, Jr. was the editor.

trauma — n. a very difficult or unpleasant experience that causes someone to have mental or emotional problems usually for a long time

rubble — n. broken pieces of stone, brick, etc., from walls or buildings that have fallen

spare — v. to choose not to punish or harm

blockade —n. an act of war in which one country uses ships to stop people or supplies from entering or leaving another country