< Chef Marcus Samuelsson Celebrates Black Food
Update Required To play the media you will need to either update your browser to a recent version or update your Flash plugin.
By Susan Shand
08 November 2020


If anyone asks chef Marcus Samuelsson what African food tastes like, he has the answer: Have you ever had barbeque? Rice? Coffee?

"All of that food comes from Africa, has its roots in Africa," says the Ethiopian Swedish writer and restaurateur. "Everyone has had African American dishes, whether they know it or not." 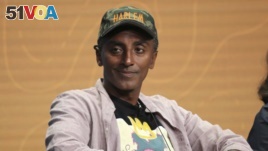 Samuelsson is chef at the famous Red Rooster restaurant in New York City's Harlem. He is hoping to educate Americans and help Black chefs in a new book. It is called The Rise: Black Cooks and the Soul of American Food.

The book has 150 recipes and includes the life stories of 26 Black chefs, writers and activists. The recipes celebrate Africa and the influence of migration and integration. It also examines where modern Black chefs are going next with their food.

"When I look at American food and I look at the Black experience, we've done so much, but almost got erased," said Samuelsson. "There's never been a better time to tell those stories," he added.

His new book is a mix of stories and food, from fish to tea. It includes essays by Osayi Endolyn of California, who writes about food, identity and culture. It also includes recipe development by Yewande Komolafe, one of Brooklyn, New York's most celebrated chefs.

Readers will learn how Los Angeles-based chef Nyesha Arrington's cooking is tied to her family history from Mississippi and South Korea. They will learn it takes just 45 minutes to make Eric Gestel's chicken liver mousse. He perfected the dish after years of cooking at New York's French restaurant Le Bernardin. And they will learn how award-winning New York chef Mashama Bailey is remaking traditional Southern dishes.

Samuelsson compares the food in the book to popular music. He looks at New Orleans and hears jazz from the influence of France, Haiti, Africa and Spain. Black food is no different.

"Our pasts are so unique and it's so important to tell," says Samuelsson. He notes that many cookbooks celebrate European and Asian foods, but few describe Black dishes. Americans know more about cheese products from Italy than the cheese of Ethiopia.

barbecue – n. meats cooked on an outside grill

dish – n. food that is prepared in a particular way

integration – n. in the U.S., removing barriers between races

recipe – n. a set of instructions for making food

essay – n. a short piece of writing that tells a person's thoughts or opinions about a subject

mousse – n. a cold and sweet food made with whipped cream or egg whites and usually fruit or chocolate

unique – adj. used to say that something or someone is unlike anything or anyone else