< Schools in Washington, DC Experiment During Health Crisis
Update Required To play the media you will need to either update your browser to a recent version or update your Flash plugin.
By Alice Bryant
20 October 2020


Returning to school in Washington, D.C. during the coronavirus crisis has been an experiment in learning. Charter schools are trying out in-person schooling for small groups.

A charter school is a tax-supported school created through a legal agreement between a school board and an outside group.

Meridian Charter School, for example, experimented with ways to prevent the spread of the new coronavirus. The school set up tall, three-sided dividers to keep students separated. But then school officials learned that this would not really prevent the spread of the virus. Now the dividers are not required. But more than half of the students still use them as personal organizers – putting notes and pictures on them.

"It's all a learning experience, and it's all playing out in real time," said Matt McCrea, Meridian's head of school. 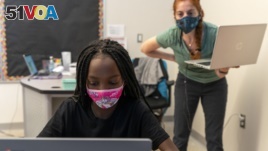 Most of Washington's 52,000 public school children are dealing with learning on computers in virtual classrooms. But more than 10 charter schools have experimented by giving in-person classes to small groups of students.

The charter schools are smaller and sometimes have better resources than the D.C. Public Schools system, or DCPS. So they have been able to make these changes quickly.

"This is our attempt to redesign school," said Myron Long. He is executive director of the Social Justice School. It is offering in-person classes to about 15 of its 50 total students.

It is a process that Washington D.C. Public Schools has watched as the organization plans its own return to the classroom.

Mayor Muriel Bowser had planned to start the 2020 to 2021 school year with a combined model. The idea was to have virtual learning with two days each week of in-school teaching. However, the city had to change that plan because of safety concerns raised by the teachers' union.

The city studied the charter experiments "to see what's working," Bowser said. But, she noted, "...DCPS will have to make decisions that affect...60 buildings, 50,000 [students] and over 4,000 employees."

The most recent reopening plan for Washington D.C.'s public schools seems to take ideas from the charter schools' experiences. Parents are given choices for how they want their child to attend.

For example, one choice would give in-person classes to a small group of students. Students with special-education needs, students learning English and students who are homeless or otherwise at-risk would be included in this group. Those are mainly the kinds of learners D.C. charter schools chose for their own student groups for in-person classes.

"We wanted (the spots) to go to students and families that had the greatest need," said Justin Lessek. He is executive director of the Sojourner Truth charter school, which is giving in-person classes to 20 of its 93 students.

In some cases, "spots," or placements, were given to the children of essential workers. Meridian Charter School had to deny some parents. But the Social Justice School was able to take every student whose parent showed interest.

"Some parents contacted us and just said, 'We have nowhere for them to go during the day,'" Long said.

Each charter school develops its own health safety rules. At Meridian, all students and visitors have their temperature taken upon arrival. Social Justice School does more. There, visiting reporters were required to wear full medical clothing, including hand and face coverings, just to enter the building.

There is a huge amount of trial and error, said Shannon Hodge. She is with the D.C. Charter School Alliance, a nonprofit group that advocates for the charter system.

At the Social Justice School, each of the three student groups is given a bathroom to use.

At both Meridian and Social Justice, water fountains are not in use. Students at Meridian have their own water containers and can fill them at special water devices.

The Social Justice School opened its doors for the first time this fall after approval from the D.C. Public Charter School Board. So, it has never operated under normal conditions.

The school places importance on the values of social and racial awareness. It seeks to build a strong community around its 50 students and families. But it has been nearly impossible for this new community to meet over the summer. Now, school officials have started holding outdoor gatherings around the city on Wednesdays. During those hours, there are no classes, so students, parents, teachers and other workers can safely meet each other.

Long said the idea came about partly because the small school did not have enough teachers to teach in physical and virtual classrooms. But the communal plan also fits the school's values of equality, he said.

Mayor Bowser's education officials have been in contact with charter schools to learn from all of the activities.

virtual –adj. existing or taking place on computers or on the internet

(labor) union –n. an organization of workers formed to protect the rights and interests of its members

essential workers –n. workers who are required to work during a business closure to meet operational requirements

advocate –n. a person who argues for or supports a cause or policy

fountain –n. a device that sends out a stream of water (for drinking)

awareness –n. knowledge of something