< 13 Charged in Plot to Kidnap Michigan Governor
Update Required To play the media you will need to either update your browser to a recent version or update your Flash plugin.
By Hai Do
08 October 2020


Police in the United States have arrested 13 people in connection with reported plots to kidnap the governor of Michigan and attack the state's Capitol building.

A federal court charged six men with plotting to kidnap Governor Gretchen Whitmer from her home. The Federal Bureau of Investigation says the group sought to carry out the crime before the U.S. presidential election November 3. It says the suspects wanted to act against what they saw as Whitmer's "uncontrolled power."

Separately, seven other people were charged in state court under Michigan's anti-terrorism laws. They are accused of planning to attack police and seeking a "civil war."

The FBI said four of the men charged had planned Wednesday to meet to "make a payment on explosives and exchange," equipment for kidnapping Whitmer. 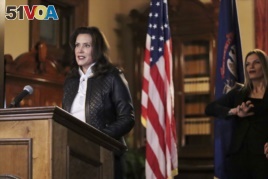 In a photo provided by the Michigan Office of the Governor, Michigan Gov. Gretchen Whitmer addresses the state during a speech in Lansing, Mich., Thursday, Oct. 8, 2020.

Whitmer, a Democrat, was once considered a possible running mate to presidential candidate Joe Biden. She has been both praised and criticized for her actions to deal with the coronavirus health crisis in Michigan.

The state's Republican Party lawmakers and other conservatives criticized restrictions Whitmer ordered to stop the spread of the coronavirus. They said the actions hurt Michigan's people and economy.

President Donald Trump has also criticized Whitmer. Last April, he called on her to reopen the state, posting the statement "LIBERATE MICHIGAN" on social media.

On Thursday after the charges were announced, Whitmer accused Trump of encouraging extremist groups. She noted Trump's refusal to condemn extremist groups during last week's presidential debate, instead telling one such group to "stand back and stand by."

"Hate groups heard the president's words not as a rebuke but as a rallying cry, as a call to action," Whitmer said. "When our leaders speak, their words matter. They carry weight."

Internal U.S. security reports have warned recently about possible plans of violent American extremists in connection to the upcoming elections.

Andrew Birge is the U.S. attorney for the western district of Michigan. He said the FBI learned through social media that a group of people were discussing the "violent overthrow" of Michigan's government. That led to a months-long investigation and the arrests.

"The group talked about creating a society that followed the U.S. Bill of Rights and where they could be self-sufficient," the FBI said in a court document. "They discussed different ways of achieving this goal from peaceful endeavors to violent actions... Several members talked about murdering ‘tyrants' or ‘taking' a sitting governor."

Michigan Attorney General Dana Nessel announced the state's charges against seven men who are members of a militia group called Wolverine Watchmen. She said the group was looking to identify "the home addresses of law enforcement officers in order to target them." Nessel said the accused planned to start a civil war.

Matthew Schneider is a U.S. attorney for the eastern district of Michigan. He said the arrests should send a message that violence will not be accepted.

"All of us in Michigan can disagree about politics but those disagreements should never, ever amount to violence," Schneider said.

Hai Do adapted this story for Learning English based on reports from the Associated Press and Reuters. Caty Weaver was the editor.

rebuke - n. disapproval of someone because of their action or behavior

internal - adj. coming from inside

achieve - v. to reach a goal

address - n. the words or numbers that are used to describe a location of a building