< 'Carrying a Torch for Someone' Can Hurt A Lot
Update Required To play the media you will need to either update your browser to a recent version or update your Flash plugin.
By Anna Matteo
13 February 2021

February 14 is Valentine's Day in the United States!

For many people, it is a romantic day. It's the day to show your love for that special someone in your life, usually a boyfriend, girlfriend, husband or wife. 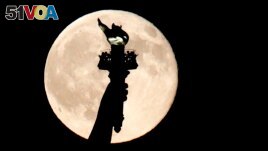 In this July 31, 2015, file photo, a full moon rises behind the torch of the Statue of Liberty as seen from Liberty State Park in Jersey City, N.J. But what does it mean "to carry a torch for someone"? Read on to find out! (AP Photo/Julio Cortez)

Of course, you should do that every day. But on Valentine's Day there is a special pressure to do so with a gift. Popular gifts for this holiday include flowers, candy and a card or maybe a nice dinner out in a restaurant.

Some people use Valentine's Day to declare their love for someone. Just be careful. A declaration of love is a serious move. And, if the person you love is also a friend, you may put your friendship at risk. There is no turning back once you say the words, "I love you." In other words, there is no putting that genie back in the bottle.

Or maybe it happens the other way around for you. Maybe Valentine's Day is the day you find out that you have a secret admirer. That happened to me once and it was very awkward.

One Valentine's Day many years ago, an old flame of mine showed up at my door unexpectedly, out of the blue. In one hand he had chocolates, in the other some beautiful flowers. He told me that he never stopped thinking of me and that he still loved me. I was shocked. I had not seen him in over a year. Then my shock turned to pity because I did not feel the same way. While he had carried a torch for me for all those months, I had gotten over him a long time ago.

Still, I invited him in for a cup of tea. After all, he had just flown into town. When I told him that I did not feel the same way, he did not waste a minute. He turned to my roommate, handed her the flowers and asked, "What about you?"

Both of us shouted the same thing.

So, I guess he wasn't carrying a torch for me after all.

British "torch" not the same as American "torch"

In British English, a torch is a simple flashlight. But in the U.S., a torch is fire, or a flame, on a stick. If you say you carry a torch for someone, you mean you are carrying a flaming love for them in your heart. But usually, you secretly love them from a distance. And often, those strong feelings are not returned.

We have a special way to describe this type of heartbreak – unrequited love. That is an advanced way of saying unreturned love -- which we don't really say. I like to describe unrequited love as love traveling in one direction down a dark, lonely, dead-end street, going nowhere.

Come back to me,

Torch singers sound as if they are filled with pain as the unrequited flame of love burns deeply inside them. Torch songs are filled with yearning -- wishing and hoping with all your heart that the person you love will love you back.

And that is all the time we have for this Words and Their Stories.

Until next time... I'm Anna Matteo.

romantic – adj. of, relating to, or involving love between two people

secret admirer – n. someone who shows that he or she thinks highly of a person (as by sending flowers) but keeps his or her identity a secret from that person

pity – n. sympathetic sorrow for one suffering, distressed, or unhappy

carried a torch – phrase : To be in love with someone, especially secretly and/or unrequitedly.