< Candidates Seek Pathway to Become Japan’s Next Prime Minister
Update Required To play the media you will need to either update your browser to a recent version or update your Flash plugin.
By Alice Bryant
09 September 2021


Several Japanese politicians have announced their decisions to seek the leadership of the country's ruling party. The winner will likely become Japan's next prime minister.

Fumio Kishida announced his decision to seek the position this week. Kishida presented his economic policies to the leadership of the Liberal Democratic Party, or LDP. The party leads the lower house of Japan's legislature.

Kishida is a former foreign minister. He said Japan should aim for a new form of capitalism to reduce disparity in pay between high paying jobs and low paying ones. He notes that the disparity has worsened during the COVID-19 health emergency.

The race for leadership of the LDP began last week after Prime Minister Yoshihide Suga announced his decision not to seek reelection as party leader. 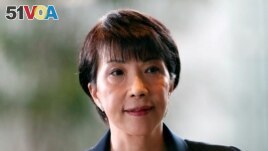 Kishida said removal of financial restrictions during the reform period in the early 2000s increased the gap between people with and without wealth. He said that the economic policies under former Prime Minister Shinzo Abe, known as "Abenomics," increased growth. But, he said, it did not result in improvements for poor people.

Without "distribution" of wealth, there will not be a rise in spending and demand, Kishida said at a Tokyo presentation Wednesday.

He said Abenomics had brought growth but it did not provide money to the poor.

Kishida repeated a call for government spending and stated again his support for the Bank of Japan's two percent inflation target.

Kishida called for setting up a $90 billion university fund to push science and renewable energy. He also wants to keep nuclear energy technology.

Takaichi launched her candidacy on policies to strengthen security and help fix damage to the economy caused by the coronavirus crisis.

She became the first female internal affairs minister in the second Abe administration in 2014. Local media said Abe supported her campaign. That helped her get the support of 20 lawmakers, which she needed to formally enter the race.

The vote for the leader of the ruling LDP is set for September 29. The lower house of Japan's legislature will hold elections not long after that. So having a popular candidate will be important for the party leader who follows Suga.

Takaichi called for policies to prevent leaks of advanced technologies out of Japan. And she said she would delay the goal of balancing the government's main budget until the Bank of Japan's two percent inflation target was met.

She said she would use economic policies such as increasing bank lending and government spending to reach the inflation target. Japan's economy has long faced low demand which hurts prices for producers of goods.

disparity –n. a noticeable and often unfair difference between people or things

gap –n. a difference between people or groups

distribution –n. the act of giving something out to people

fund –n. an amount of money to be used for a special or specific purpose

shrine –n. a place connected with a holy person or event where people go to worship

advanced –adj. having or using new and modern methods