< Can You Start a Sentence with 'Because'?
Update Required To play the media you will need to either update your browser to a recent version or update your Flash plugin.
By Alice Bryant
10 September 2021


This week on Ask a Teacher, we answer a question from Achmad in Suriname. He asks:

Can you start a sentence with "because" or "and"? -Achmad, Suriname 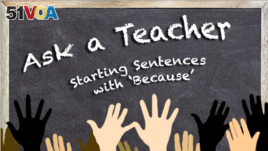 Ask a Teacher: Can You Start a Sentence with 'Because'?

Earlier this year on Ask a Teacher, we answered a reader who asked if sentences can begin with "and." The answer is yes. You can find the full answer on that program, which ran on January 8.

Today, let's talk about "because."

The word "because" is a conjunction that means "for the reason that." A conjunction is a word that joins other words or groups of words in a sentence.

To answer your question: Yes, you can start a sentence with "because." However, to be a complete sentence, it must express a complete thought.

Here are some examples of complete sentences beginning with "because":

Because I was happy, I smiled.

Because of the severe storm, my internet went down.

Notice the punctuation marks. There are commas in the middle of the sentences and periods at the end. When we start complete sentences with "because," this is how we punctuate them.

By themselves, "because I was happy" and "because of the severe storm" are not complete sentences. But that does not mean they are not acceptable. In English, we begin many answers to questions in speaking and informal writing with the word "because."

For example, suppose you are answering a friend's text message. Listen to this question and the answer:

Why did you smile?

Because I was happy

Or, imagine your coworker is asking about your internet:

Why did your internet go down?

Because of the storm

Notice that I did not put a period after the responses that began with "because." They are not full sentences. But in informal writing, such as texts or informal emails, some English speakers do put periods after incomplete sentences.

And that's Ask a Teacher for This Week. To learn more about starting sentences with "because," look for stories on adverb clauses in the series Everyday Grammar.

Alice Bryant wrote this lesson for Learning English. Ashley Thompson was the editor.

punctuation –n. the marks (such as periods and commas) in a piece of writing that make its meaning clear

text –n. data handled by a computer, cell phone, etc., that is mostly in the form of words

adverb –n. a word that describes another word and that often shows time, or something related to action

clause –n. a part of a sentence that has a subject and verb