< Calls to Reduce Seal Population in US Northeast
Update Required To play the media you will need to either update your browser to a recent version or update your Flash plugin.
By John Russell
11 October 2020


In the Northeastern United States, some Americans are debating what to do about an animal that almost died off – the grey seal. The grey seal population has grown so much in recent years that critics are calling for a reduction in numbers.

Nick Muto has fished the Atlantic Ocean up and down the New England coast. Nothing makes him angrier than the sight of a seal.

Muto is among a growing group of fishermen, beach goers and local officials who are quick to blame many problems on the growing seal population.

"The fish have been driven out of there by seals," Muto said about traditional fishing areas. He added that the seals "have eaten fish out of our nets. They have been caught in our nets. They are everywhere."

The debate over seals became stronger after the death in July of a swimmer. The swimmer was killed by a great white shark near Harpswell, Maine. Seals are often eaten by sharks, and some experts believe Julie Dimperio Holowach may have been mistaken for a seal.

There could be as many as 50,000 grey seals in New England waters. The animals were once rare because of aggressive hunting.

But experts believe there is not enough science to make an effective decision about whether the current population is too large. They say there is little reason for culling, or killing, the animals.

Experts also say there is a lack of clear evidence that seals are destroying fisheries or are totally to blame for shark attacks. Warming waters and other issues could also play a part. The Gulf of Maine, which goes from Cape Cod to Nova Scotia, Canada, has been heating up faster than most of the world's oceans.

David Johnston of Duke University has done estimates of the grey seal population.

"We get into this question of how many grey seals there are. The next question is how many seals should there be, which is kind of where people are going to go next with that, which is a very challenging thing," Johnston told the Associated Press. 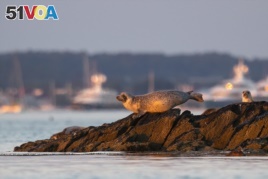 A grey seal moves across rocks on a small island in Casco Bay, Thursday, July 30, 2020, off Portland, Maine. Seals are thriving off the northeast coast thanks to decades of protections. Many scientists believe the increased seal population is leading to more human encounters with white sharks, who prey on seals. (AP Photo/Robert F. Bukaty)

The debate over grey seal numbers has led the National Oceanic and Atmospheric Administration to present ideas for how to deal with the population. The ideas include using physical barriers to keep seals away from fishing equipment.

But Johnston and Stephanie Wood, a seal biologist with the University of Massachusetts Boston, said the public should view seals as a conservation success story, rather than a problem to be solved.

Conservation is a term that means the protection of animals, plants, and natural resources.

Kristina Cammen is a marine mammal scientist with the University of Maine. She noted that reducing the number of seals is more complex than just opening up a hunt.

Learning to live with the growing seal population makes far more sense, Cammen said, even if it leads to more shark sightings in coastal waters. "A healthy ecosystem has sharks, seals and humans and they all have a place in that ecosystem."

But critics say large seal numbers hurt public safety and the environment. They warn that there will be more shark attacks if action is not taken. Tourism, too, will decrease, they say.

"The quality of life here and our ability to make a living and our economy will go down the toilet," he said. "I have respect for wildlife and respect for those that believe seals and sharks need to come back. But we have a right to survive and exist as well."

Patrick Whittle and Michael Casey reported on this story for the Associated Press. John Russell adapted it for Learning English. Bryan Lynn was the editor.

fishery -- n. a part of the ocean where fish and other sea creatures are caught

challenging – adj. difficult in a way that is usually interesting or enjoyable

marine – adj. of or relating to the sea or the plants and animals that live in the sea

tourism – n. the business of visiting places for pleasure

go down the toilet – expression to lose something or waste something