< California Oil Spill Endangers Coastal Wildlife
Update Required To play the media you will need to either update your browser to a recent version or update your Flash plugin.
By Hai Do
04 October 2021

The spill is one of the largest in the recent history of California. It is suspected to have been caused by an underwater pipeline. Kim Carr is the mayor of Huntington Beach near where the spill took place. She said an estimated 573,000 liters of unprocessed, crude oil leaked into the Pacific Ocean. Some appeared on the California coast about 65 kilometers south of Los Angeles.

Carr called the spill an "environmental catastrophe." She added, "This oil spill constitutes one of the most devastating situations that our community has dealt with" in many years.

Officials said the popular beaches of Huntington and Laguna could be closed for weeks or months.

Residents, business owners and environmentalists have questioned whether officials reacted quickly enough to contain the spill.

People who live and work in the area said they saw the shine on the water and the smell of oil Friday evening. But the U.S. Coast Guard did not announce that oil had been seen until Saturday afternoon. It said it was leading a clean-up operation. The company that operates the pipeline believed to be responsible for the spill shut it down on Saturday night.

Rick Torgerson is the owner of Blue Star Yacht Charter, a company that operates boats in the area. He said on Friday evening "people were emailing, and the neighbors were asking, ‘Do you smell that?'" He said boats were returning with oil on them.

Garry Brown is president of the environmental group Orange County Coastkeeper. Brown lives in Huntington Beach. He said, "By the time it comes to the beach, it's done tremendous damage." He felt officials could have avoided the damage if they had acted quickly. 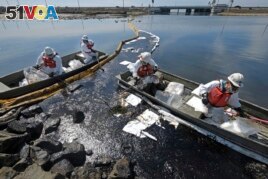 The leak appeared to come from a pipeline connecting to one of the three oil production structures off the coast of Huntington Beach. They are owned by Amplify Energy Corporation.

Amplify head Martyn Willsher said the pipeline and the structures, called rigs, were shut down Saturday night. The company said it has removed the rest of the oil in the pipeline and is investigating where and why the spill happened.

Officials said the Coast Guard deployed 1,128 meters of floating barriers to try to stop more oil from reaching the coast.

California restricted offshore drilling after an oil spill near Santa Barbara in 1969. Another broken pipeline north of Santa Barbara leaked about 541,313 liters of crude oil in 2015.

The latest spill comes 30 years after a huge oil leak took place in the same area as the one over the weekend. In February of 1990, the oil tanker American Trader had an accident near Huntington Beach. The ship spilled nearly 1.6 million liters of oil. Thousands of fish and birds died.

On Sunday, Orange County supervisor Katrina Foley said oil had entered the Talbert Marsh. The area is home to threatened and endangered species, including birds called the snowy plover and the California least tern, and humpback whales.

"The coastal areas off of Southern California are just really rich for wildlife," said Miyoko Sakashita, director of the Center for Biological Diversity's oceans program.

"The oil spill just shows how dirty and dangerous oil drilling is and oil that gets into the water. It's impossible to clean it up so it ends up washing up on our beaches and people come into contact with it and wildlife comes in contact with it," she said.

David Rapchun lives in Huntington Beach. He said he is worried about the effects of the spill on the beaches where he grew up and the local economy.

"For the amount of oil these things produce I don't think it's worth the risk," Rapchun added.

Hai Do adapted this story for Learning English from Associated Press and Reuters reports. Mario Ritter Jr. was the editor.

constitute –v. to make up or form something

beach –n. an area covered with sand or small ricks that is next to an ocean or lake