< California Approves Company to Test Cars with No Drivers
Update Required To play the media you will need to either update your browser to a recent version or update your Flash plugin.
By Bryan Lynn
20 October 2020


A company testing driverless cars has received permission from the state of California to operate the vehicles without backup drivers.

The tests will be carried out by Cruise, the self-driving car company owned by General Motors.

Cruise reported last week that it got a permit from the California Department of Motor Vehicles to let the self-driving cars travel on their own. The company plans to have them operating in San Francisco by the end of this year. 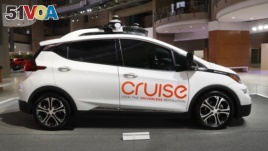 Cruise is still just testing its self-driving vehicles. But it plans to offer ride-sharing services in major cities across the United States in the future.

Until now, testing was only carried out with human backup drivers in all Cruise vehicles. Rules required the backup drivers to be inside the cars and ready to take control of the vehicles if necessary.

Cruise has completed enough testing to feel that it is now ready to safely operate the cars without humans, said company spokesman Ray Wert.

Wert said that Cruise will go neighborhood-by-neighborhood in San Francisco and launch the driverless vehicles slowly before spreading to the whole city. It will also hold community meetings to answer people's questions about the program.

"We understand that this is a trust race as much as it is a technology race," Wert told The Associated Press. "This is absolutely about making sure that we're doing this with San Francisco."

The approval in California followed a similar decision in Arizona. Arizona state officials approved a request by Waymo, a company owned by Google's parent company Alphabet Inc., to open its ride-sharing service to the public in vehicles without human drivers. The service was launched last week in the city of Phoenix.

The service, which serves a 129 square kilometer area in Phoenix, had already been available to a small group of riders for the past year. Waymo officials did not say how many fully autonomous vehicles would be made available to the public.

"We are worried about our ability to meet demand with the capabilities of the vehicle we have right now," Waymo's chief John Krafcik said to reporters last week.

Industry experts say Waymo and Cruise are among the leaders in autonomous vehicle technology.

Progress toward autonomous vehicles slowed after one such vehicle struck a pedestrian during a test in Tempe, Arizona, in 2018. That vehicle was operated by Uber Technologies.

Steven Shladover is a research engineer at the University of California, Berkeley. He has studied autonomous driving for 40 years. Shladover says the latest moves by Waymo and Cruise are the next logical steps as the technology progresses.

"I don't see them as revolutionary steps, but they're part of this step-by-step progress toward getting the technology to be able to work under a wider range of conditions," he said.

Shladover said that although Cruise and Waymo program their vehicles to drive more conservatively than humans, both still need to progress safely. He noted that Cruise will first deploy its vehicles to easier areas in San Francisco before sending them into complex traffic situations.

Cruise Chief Executive Office Dan Ammann noted that its driverless vehicles are fully electric. He said this meets another major goal of the company: to reduce greenhouse gas emissions. Gasoline-powered vehicles are the second largest cause of greenhouse gases. Such emissions have been linked to rising temperatures in Earth's atmosphere.

"We need big solutions," Ammann said. "And we need them now."

The Associated Press reported on this story. Bryan Lynn adapted the report for VOA Learning English, with additional information from Cruise. George Grow was the editor.

autonomous – adj. independent and having the power to operate automatically without human involvement

capability - n. the ability of power to do something

pedestrian - n. a person who is walking in a city, along a road, etc.

revolutionary – adj. completely different from what was done before

greenhouse (gas) – n. relating to or caused by the warming of the Earth's atmosphere that is caused by air pollution