< Broadway Returns with New Investors, Big Plans
Update Required To play the media you will need to either update your browser to a recent version or update your Flash plugin.
By Gregory Stachel
20 August 2021


Broadway, the collection of major theaters in the United States, has seen the longest shutdown in its history. It is set on proving that there is no business like show business.

Hopes are high for reopening of musicals and plays starting in September. They are led by the three big musicals in the industry: "Hamilton," "The Lion King," and "Wicked." These three musicals were taking in about $1 million a week before the 18-month shutdown began in March 2020.

Theaters will be permitted to fill their seats to 100 percent. Actors and other crew members will be required to show proof of vaccination.

Always ready for risks, Broadway producers are backing new projects even with millions of dollars in lost sales.

Ken Davenport is a producer who has won Tony Awards, the highest award on Broadway, for his musicals "Kinky Boots" and "Once on This Island." He said, "Producers produce what they're passionate about. There's nothing safe about what we do. If we wanted safe, we would be in investment banking, or an accountant, or a lawyer." 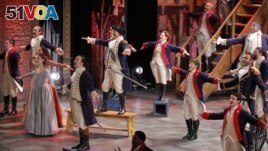 Davenport has six new shows in development. He said, "This is a business that favors the bold..." He believes there will be a rebirth of theater over the next five years.

Starting a new Broadway musical requires an immediate investment of about $10 to $15 million. This includes wages for the cast and crew, advertising, backgrounds, and makeup. Plays – without music - generally cost less than half that number.

Broadway's hopes are still high even though important producer Scott Rudin said in April he would take a leave from the business for a while after several accusations of bullying actors and others. Rudin has apologized for his behavior.

Instead, Rudin's step back has opened the way for new investors who want big projects like bringing back musicals from the past, such as "Funny Girl" and "Dreamgirls."

Gordon Cox is a head writer on theater for Variety, which covers Broadway. He said Rudin's step back has not left a hole. He added there are whole groups of people that now feel like they can get involved and "it seems like a cool thing to do."

The Broadway League said it will not release official numbers of returns for the next few months. However, sales websites show formerly popular shows have had slow sales.

Seven new plays have been announced for this fall, all by Black writers. Some are being financed by first-time Broadway investors. They include co-founder of the television network BET, Sheila Johnson, who is putting money behind the play "Thoughts of a Colored Man." Johnson and famous cook Carla Hall are also investing in a new musical called "Grace" about Black food and cooking history.

Actor Blair Underwood and former sportsperson Renee Montgomery are investing in the play "Pass Over," a modern remake of "Waiting for Godot."

Brian Moreland is the producer of "Thoughts of a Colored Man," opening in October. He said, "There is various new money that is coming into Broadway, and that money is extraordinarily helpful and it is also diverse money, which is also very interesting and new."

Jill Serjeant reported this story for Reuters. Gregory Stachel adapted it for VOA Learning English. Susan Shand was the editor.

passionate – adj. having, showing, or expressing strong emotions or beliefs

accountant – n. someone whose job is to keep the financial records of a business or person

bully – v. to frighten, hurt, or threaten (a smaller or weaker person)

classic – adj. used to say that something has come to be considered one of the best of its kind

various – adj. used to refer to several different or many things or people

diverse – adj. made up of people or things that are different from each other