< Broadway Closure Continues Until End of May
Update Required To play the media you will need to either update your browser to a recent version or update your Flash plugin.
By Alice Bryant
14 October 2020


Theater lovers will have to wait a little longer for New York City's Broadway shows to restart. Broadway theaters will be closed until at least late May.

An exact date for their reopening has yet to be decided. But Broadway producers are now offering to return money for tickets purchased for shows through May 30. Or theatergoers can exchange their tickets for a show after that date. 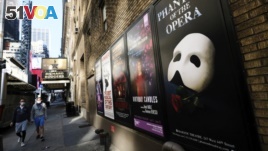 FILE - Broadway posters outside the Richard Rodgers Theatre in New York on May 13, 2020. (Photo by Evan Agostini/Invision/AP, File)

Charlotte Saint Martin is president of the Broadway League, an organization that represents the producers. She said they are working "tirelessly" with many partners to keep the industry alive when theaters reopen.

The Broadway League made the difficult decision of putting their workers and theatergoers first, the group said. "This is a deeply painful time" for people who need the arts to make a living, said Mary McColl. She serves as executive director for Actors' Equity Association.

McColl blamed Broadway's ongoing closure on the federal government's lack of a national plan to fight the coronavirus pandemic. She added that a plan for face coverings and testing could bring the virus under control.

Because of COVID-19, Broadway theaters closed on March 12, ending all productions. The closure of theaters has also caused a delay in the Tony Awards, the yearly awards ceremony for live Broadway theater.

The new end-of-May date could affect several shows that had planned to open earlier this year. They include "The Music Man," "Flying Over Sunset," "Caroline, or Change," "Plaza Suite," "American Buffalo" and "The Minutes."

Within hours of the announcement last week, the musical based on the life of singer Michael Jackson, called "MJ," pushed back its performances to September of 2021.

The decision by the Broadway League comes less than a month after New York's Metropolitan Opera canceled its performances for the year. This will be the first time the opera company has canceled an entire season of shows in its nearly 140-year history. It plans to re-open in September of next year.

In London, producer Cameron Mackintosh said his company's productions of "Hamilton," "The Phantom of the Opera," "Mary Poppins" and "Les Miserables" will not reopen until 2021. The John F. Kennedy Center for the Performing Arts in Washington, D.C., has canceled many performances and events through the end of 2020. In Boston, Huntington Theatre Company has done the same.

The Associated Press reported this story. Alice Bryant adapted it for Learning English. George Grow was the editor.

ticket - n. a piece of paper that allows you to see a show, participate in an event, or travel in a vehicle

stage manager - n. a person who is in charge of the stage, scenery, lighting, and other things, for a performance in a theater

opera - n. a kind of performance in which actors sing all or most of the words of a play with music performed by an orchestra