< Brazil Water Study Raises Fears for Drought
Update Required To play the media you will need to either update your browser to a recent version or update your Flash plugin.
By Alice Bryant
06 September 2021


The Brazilian scientists were in disbelief after seeing the results.

They tested different models to re-check their information. But all returned the same.

The country with the most freshwater resources in the world had lost 15 percent of its surface water since 1991.

There has been slow water loss in the Brazilian-owned part of the Pantanal. The Pantanal is the world's largest warm-climate wetland. It covers an area of between 140 thousand and 195 thousand square kilometers over three countries. Today, water coverage in the Pantanal is only 25 percent of what it was thirty years ago.

And the scientists' findings are only up through 2020. This year's drought has been Brazil's worst in ninety years.

"When we got the first results, we wondered if there was a problem" with the math, said Cassio Bernardino. He is a project manager for the environmental group WWF-Brazil. He took part in the study along with Brazilian universities and local partners like the Amazon Environmental Research Institute. It also included international cooperators such as Google and The Nature Conservancy. 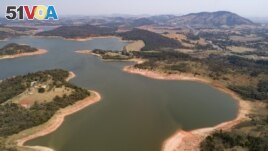 A general view of the Jaguari dam, which is part of the Cantareira System, responsible for providing water to the Sao Paulo metropolitan area, in Braganca Paulista, Brazil, Wednesday, Aug. 25, 2021. (AP Photo/Andre Penner)

The group used artificial intelligence to study 150,000 satellite images of all surface water across Brazil, including lakes and rivers.

And their numbers were correct.

The ongoing drought has already raised energy costs and food prices. It has also dried out crops. And it has increased the risk of wildfire for large parts of forest.

Specialists warn of possible electricity shortages. President Jair Bolsonaro on Thursday said hydroelectric dam reserves are "at the limit of the limit."

Evaporation is a part of the natural process that can lessen water resources. This is especially true in areas with low water levels like the Pantanal wetlands. But the scientists believe something else is happening.

Experts have warned human activity is affecting the world's weather patterns. It is causing extreme events to happen more often, such as severe droughts and floods.

The cutting and burning of forest and the building of large hydroelectric factories and dams for watering crops all affect natural patterns, said Ma&#382;eika Patricio Sulliván. He is an ecology professor at Ohio State University.

Sulliván is a wetlands expert who has studied water systems in the United States, South America, Eastern Europe and the Caribbean. "This is not just happening in Brazil. It's happening all over the world," he said.

Sulliván said an estimated 90 percent of South America's wetland area has disappeared since 1900. That number is nearly 40 percent in North America, he said. Many kinds of wildlife need wetlands. Wetlands also slowly release water into rivers, which prevents flooding.

In Brazil's Amazon rainforest, water evaporates then travels on air flows to provide rainfall far away. But some climate experts say if too much forest is destroyed, the Amazon will start an irreparable process of becoming a savannah.

There are more immediate causes for worry, like possible power shortages this year. Hydroelectric reservoirs have had ten years of lower-than-usual rainfall. Reservoirs in the Parana River area have never before been so overused, one worker said [this month].

The Parana River and its connected water bodies supply fresh water to some 40 million people. That includes the large city of Sao Paolo and several states. Fishing communities and farmers also depend on these water bodies.

On August 25, Brazil's energy minister, Bento Albuquerque, called a press conference to deny the possibility of limiting water. At the same time, he told companies and people to reduce power usage.

"At the current rate, blackouts are likely to happen this year," especially during high-usage hours, said Nivalde de Castro. He is with the electricity industry studies group at the Federal University of Rio de Janeiro.

Brazil's decreasing water resources may also worsen fires that people set each winter to clear land. The fires then burn out of control.

Last year, more than 25 percent of Brazil's Pantanal was on fire. It was the worst yearly damage since officials began keeping records in 2003.

The Pantanal has strong ability to restore itself if given the chance to do so without repeated burning events. A series of fires [in the past week] caused concern among local people.

Once again, the threat of fires is back, said Angelo Rabelo. He is president of a local environmental group that manages a protected area of about 300,000 hectares. Last year, 90 percent of his land was damaged by fires.

For Rabelo and others, those fires were a wake-up call. He formed a full-time private firefighting team of seven people — the Pantanal's first. They are better trained and have so far been able to respond faster than government fire fighters, before fires get out of control.

But in areas without roads, moving on smaller rivers can be a problem because of low water levels, Rabelo said. That means firefighters could soon have trouble reaching some fires. And, even if they can, less water is available to put them out.

We need to start thinking about the water loss and wildfires together, said Sulliván.

data - n. facts or information used usually to calculate, analyze, or plan something

drought - n. a long period of time during which there is very little or no rain

artificial intelligence - n. an area of computer science that deals with giving machines the ability to seem like they have human intelligence

evaporation - n. the act of changing from a liquid to a gas

pattern - n. the regular and repeated way in which something happens or is done

ecology - n. a science that deals with the relationships between groups of living things and their environments

reservoir - n. a usually artificial lake that is used to store a large supply of water for use in people's homes and in businesses

blackout - n. a period when lights are off because of an electrical power failure