< Brazil Records 4,000 Daily COVID Deaths for First Time
Update Required To play the media you will need to either update your browser to a recent version or update your Flash plugin.
By Dan Novak
08 April 2021


Brazil reported more than 4,000 COVID-19 deaths in one day for the first time this week. As the death tolls rise, experts fear that the South American country could pass the United States death total from the coronavirus pandemic later this year.

The total number of deaths recorded by Brazil's health ministry is close to 400,000. The U.S. is the only country with more deaths, at about 555,000. Brazil has two-thirds of the U.S. population.

From the start of the health crisis, Brazil's President Jair Bolsonaro has resisted measures to prevent the spread of the virus like wearing cloth coverings and social distancing. He once called the coronavirus a "small flu."

The country's governors and mayors are reopening parts of the economy while the healthcare system is at risk of collapsing. Hospitals are overcrowded. COVID-19 patients are using more than 90 percent of hospital beds in intensive care units for the sickest patients.

Adding to the problem, Brazil also has many different COVID variants. And this week, a judge ruled that schools could reopen in Rio de Janeiro. 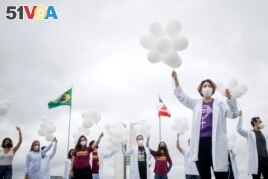 Brazilian officials, however, are claiming life will be back to normal soon. "We think that probably two, three months from now Brazil could be back to business," said Economy Minister Paulo Guedes.

Miguel Lago is the director for the Institute for Health Policy Studies in Brazil. He said reopening is a mistake that would bring even higher death numbers. He also said local political leaders fear the president's supporters will try to stop any policies like social distancing from going into effect.

"The fact is," Lago said, "the anti-lockdown narrative of President Jair Bolsonaro has won."

While the U.S. is working to make vaccines available to all adults by April 19, Brazil has been slow to vaccinate its people. Our World in Data, an online research site, says just 3 percent of the Brazilian population has been fully vaccinated.

Miguel Nicolelis is a Brazilian doctor and professor at Duke University. He compared the situation in Brazil to Japan's nuclear disaster.

"It's a biological Fukushima," he said.

Both Nicolelis and Christovam Barcellos, a researcher at Brazilian medical institute Fiocruz, are warning that Brazil will soon pass the U.S. in total and daily death numbers.

The respected Institute for Health Metrics and Evaluation at the University of Washington created a model to predict COVID deaths in Brazil through June. It says Brazil may even break the U.S. seven-day average for COVID-19 deaths as soon as next week.

toll- n. - the number of people who are killed or injured in an accident, disaster, war, etc.

biological- adj. of or relating to biology or to life and living things

lockdown- n. an emergency measure of keeping people in a secure place to avoid or prevent danger

narrative n. a story that is told or written