< Boric Wins Chilean Election, Promises to be President for all Chile
Update Required To play the media you will need to either update your browser to a recent version or update your Flash plugin.
By Dan Friedell
20 December 2021

He defeated Jose Antonio Kast in a second election after the first-round of voting in November did not produce a winner. The two men received the most votes in November.

Boric, 35, will be Chile's youngest modern president when he takes office in March. 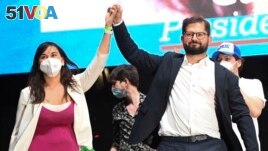 Chilean president-elect Gabriel Boric (R) and his chief of campaign Izkia Siches wave at supporters following the official results of the runoff presidential election, in Santiago, on December 19, 2021. (Photo by MARTIN BERNETTI / AFP)

He entered politics in 2014 when he won a congressional election. Boric was known then for leading protests demanding improvements in the educational system.

During the campaign, he promised to move the South American country away from some economic policies put in place during the dictatorship of Augusto Pinochet. Pinochet was in power from 1973 to 1990.

Kast praised some policies of the Pinochet time during the campaign.

Boric finished the first vote two points behind Kast, but he gained voters outside of the capital of Santiago before the second election. He finished ahead of Kast by 20 points in the northern region of Antofagasta. He won by 10 points overall.

Boric said he would raise taxes on rich people to fund social programs, help the environment, and fight inequality in Chile.

Kast, 55, won less than 8 percent of the vote in 2017. He gained popularity in the last four years with policy arguments compared to those of former United States President Donald Trump. Kast said he would restrict migration from countries like Haiti and Venezuela. There are fears in Chile that migrants are responsible for an increase in crime.

As the election got closer, both candidates tried to move toward the middle to capture more voters.

Boric was supported by Chile's left-wing parties, including the Communist Party. After adding new advisers in recent weeks, Boric said any changes would happen slowly and responsibly.

Before the vote, a political expert at the University of Chile said people in the country were not excited about either candidate.

Robert Funk said people in Chile worried that Kast would put extreme policies in place and that Boric was inexperienced.

Even with the win, Boric may not be able to have a major effect on Chile because the congress is divided. In addition, the constitution of Chile is in the process of being re-written for the first time since the time of Pinochet. There could be a new election in the near future.

Dan Friedell adapted this story for Learning English based on a story the Associated Press. Susan Shand was the editor.

Do you think the new leader will help people in Chile? Tell us in the Comments Section and visit 51VOA.COM.

argument – n. a statement or series of statements for or against something