< Book Explains Commonly Confused Cooking Terms
Update Required To play the media you will need to either update your browser to a recent version or update your Flash plugin.
By Anna Matteo
01 August 2021

With some foods, people can easily get confused about the correct names.

For example, some might say yam when they actually mean a sweet potato. Is there any difference between shrimp and prawn? If a dish needs condensed milk, can you use evaporated milk instead? 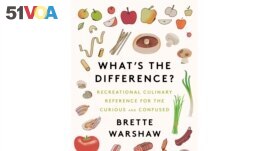 This cover image released by Harper Wave shows "What's the Difference? Recreational Culinary Reference for the Curious and Confused" by Brette Warshaw. (Harper Wave via AP)

Well, one woman decided to answer these questions and many more in a new book called What's the Difference? Recreational Culinary Reference for the Curious and Confused.

Writer Brette Warshaw recently spoke with the Associated Press. In her book, she explains the difference between jam and jelly, between broth and stock. She also explores how pie differs from tart.

"I feel like this hopefully can help fill in the gaps for people," Warshaw said. "And even if they do know the difference, hopefully there's some other fun facts they can take away to make their knowledge more well-rounded."

In one explanation, she describes the difference between Parmesan -- a kind of dried cheese sold in the U.S. -- and Parmigiano-Reggiano. Parmigiano-Reggiano is a cheese that comes from a certain area in Italy and is prepared to meet specific standards.

Parmesan, on the other hand, does not have such standards. In fact, it does not even have to be 100 percent cheese, Warshaw said. She added that "... all sorts of stuff could be passing as Parmigiano-Reggiano and it's definitely not the same thing."

However, Warshaw says she is not criticizing the use of such a product. In fact, her boyfriend uses Parmesan on his pizza, and she still plans to marry him. "The crime is not actually eating it," she said. "If you want to eat it and you like it, no judgment there." She says she just wants people to use the right name.

Sometimes Warshaw's research discovered no difference between commonly confused foods. For example, readers may be shocked to discover that button, cremini, and Portobello mushrooms are all the same kind of mushroom.

Or they may be surprised to find out that shrimp and prawns are completely different creatures, but they taste about the same.

She said that is an interesting example. There is definitely a difference between shrimp and prawn. But in the end, she said, it doesn't really matter.

However, do not confuse condensed milk with evaporated milk. They are not used in the same way.

She said, "I had been debating with friends about the difference between a sweet potato and a yam and realized I didn't know the difference." And, she said she was kind of upset by that.

Karen Rinaldi is senior vice president and publisher at Harper Wave. As she worked on the book project, Rinaldi advised Warshaw to write only about confusing food terms.

Rinaldi cooks all the time and still finds things confusing, like the differences between different types of beer: IPA, pale ale, and pilsner. However, the description she most enjoys is about these baked goods: cobblers, crisps and crumbles. The publisher added that the explanation helped her answer a question she had long asked.

Many people have questions about a common cooking item: oil. Is there a difference between canola and corn oils? What about grapeseed, peanut, safflower and vegetable oils? She found out that the kind of oil may not make much of a difference when cooking with it.

"Something that a lot of people maybe don't know is that any sort of neutral oil is pretty much fine for the same sort of purpose," she said.

Rinaldi told the AP that one goal of the book is to make cooking a bit easier. She said if you know the basics, you know what can be used in place of something else.

One unanswered question still bothers Warshaw: What is the difference between frosting, icing, and glaze? They are all sugary toppings that go on sweet baked goods. But all her research has not yet given her a good explanation.

She said the answer might be that there is no answer. "But that is a tough thing to accept," she admits. So, she says she will continue trying to get to the bottom of that food mystery.

Mark Kennedy reported this story for the Associated Press. Anna Matteo adapted it for VOA Learning English. Bryan Lynn was the editor.

confused – adj. unable to think clearly or understand something

condensed milk – n. a thick and very sweet milk from which water has been removed

evaporated milk – n. milk that has been made thicker by removing some of the water from it and is often used to make sweet dishes

fill in the gaps – idiom. to add what is needed to make something complete

standard – n. a level of quality that is considered acceptable

neutral – adj. having no strongly marked characteristics of features

the basics – n. the most important facts, skills or needs