< Bob Dylan Teaches You About Questions, Count Nouns
Update Required To play the media you will need to either update your browser to a recent version or update your Flash plugin.
By John Russell
13 May 2021


Nobel prize winner Bob Dylan is considered to be one of the best American songwriters. 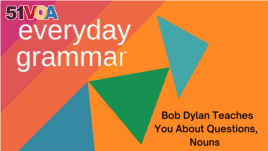 In today's Everyday Grammar, we will explore how Blowin' in the Wind, a famous Bob Dylan song, can teach you about English grammar. You will learn about question words, nouns and more.

Let's begin by listening to part of the song:

Blowin' in the Wind

Yes, and how many years must a mountain exist

Before it is washed to the sea?

And how many years can some people exist

Before they're allowed to be free?

Dylan's song has a group of questions, one after the other, followed by an answer:

Let's explore the grammar of the words in greater detail. In English, we use question words – what, where, how - to ask for information.

The word "how" generally asks about manner – the way in which something is done. For example, imagine you saw a circus performer swallow fire.

How did you do that?

But when used with words such as "much" and "many," how asks about quantities.

For example, you might hear an American ask the following about a price:

How much money does it cost?

How much [money] does it cost?

Here is another example of a quantity question:

How many people came to the Bob Dylan concert?

The answer is about nouns.

There are two kinds of common nouns – count and noncount nouns. Count nouns include words like guitar or song. You can count guitars and songs. Consider the following statements:

I own five guitars.

The question form "how many..." is used with plural count nouns. For example:

How many guitars do you own?

I own five guitars.

I need to make money.

In general, the question form "how much..." is used with noncount nouns.

How much money did you spend on that new guitar?

I spent all of the money that I earned last week!

How does this discussion connect with the Bob Dylan song?

If you listen carefully to the Bob Dylan song, you will notice that the structure "how many..." plays an important part.

Yes, and how many times can a man turn his head

And pretend that he just doesn't see?

And consider these lines:

Yes, and how many ears must one man have

Before he can hear people cry?

Yes, and how many deaths will it take till he knows

That too many people have died?

And the answer to his questions is always the same:

The next time you listen to any song in English, try to look for some kind of pattern.

One way to think about Dylan's song is that it is about questions, answers and count nouns. But other songs have different structures, ideas and grammar points. By carefully studying songs, you can learn a lot about English grammar.

songwriter – n. a person who writes the words or music to songs

quantity – n. an amount or number of something

pretend – v. to act as if something is true when it is not true

ear – n. the part of the body that you hear with

pattern – n. the regular and repeated way in which something happens or is done