< Black Winemakers in US Look to Increase Diversity in their Business
Update Required To play the media you will need to either update your browser to a recent version or update your Flash plugin.
By Dan Friedell
17 March 2021

That is how Sunshine Foss welcomes people into her wine store in Brooklyn, New York. She opened the store in 2018. 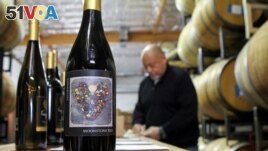 A bottle of Longevity Wines' Moonstone Red sits on a table at Phil Long's winery in Livermore, California. (REUTERS/Nathan Frandino

Today, Foss is one of a growing number of Black people in the wine industry.

She said she speaks with Black winemakers who tell her many owners of wine stores are not interested in buying wine from them.

"So, for me, it's extremely important to be able to give this platform to a lot of these Black-owned winemakers."

Foss carries wines from all over the world, but she pays special attention to those made by African-Americans. The store now sells wine offerings by American singers Mary J. Blige and John Legend, and basketball star Dwyane Wade.

When she first opened her store, however, she found it hard to find wines made by Black people. But now people know about her store and ask her to sell their wine.

He said membership in his organization has grown by 500 percent since 2019. But he noted that people like him have a lot of work to do to reach their goal of making more people know about wine made by Black winemakers.

He said there are only about 25 Black-owned wineries out of the thousands in the U.S.

"Once I realized how few there were and I started understanding the non-diverse landscape, that's when it became more of an element of who I am."

Long said he chose to get into the winemaking business after having to wait a long time to be served while visiting a winery near Santa Barbara, California.

"I stood there waiting...and no one ever acknowledged me," Long said.

Kristin Braswell owns a travel business. She started holding wine-tasting events by video during the coronavirus pandemic. She thought it would be a good way to show winemakers that Black people are just as interested in learning about wine as white people are.

Steve Byfield owns Nyarai Cellars in Ontario, Canada. He said he and other Black people in the wine business are trying to show "that our place is very much valid like anybody else's in this industry."

The Reuters News Agency wrote this story. Dan Friedell adapted it for Learning English. Ashley Thompson was the editor.

Do you pay attention to who makes the wine you like to drink? We want to hear from you. Tell us in the Comments Section and visit 51VOA.COM.

platform –n. something that allows someone to tell a large number of people about an idea, product, etc.

diverse –n. made up of people or things that are different from each other

acknowledge –v. to show that someone has been seen and recognized : to look at or talk to (someone)