< The Birthmark by Nathaniel Hawthorne
Update Required To play the media you will need to either update your browser to a recent version or update your Flash plugin.
By Dana Demange
16 October 2020


Our story today is called "The Birthmark." It was written by Nathaniel Hawthorne. Here is Barbara Klein with the story.

A long time ago, there lived a skillful scientist who had experienced a spiritual reaction more striking than any chemical one. 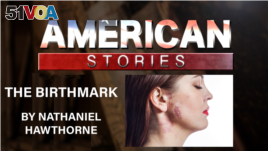 The Birthmark by Nathaniel Hawthorne

He had left his laboratory in the care of his assistant, washed the chemicals from his hands and asked a beautiful woman to become his wife. In those days new scientific discoveries such as electricity seemed to open paths into the area of miracles. It was not unusual for the love of science to compete with the love of a woman.

The scientist's name was Aylmer. He had so totally given himself to scientific studies that he could not be weakened by a second love. His love for his young wife could only be the stronger of the two if it could link itself with his love of science.

Such a union did take place with truly remarkable results. But one day, very soon after their marriage, Aylmer looked at his wife with a troubled expression.

"Georgiana," he said, "have you ever considered that the mark upon your cheek might be removed"?

"No," she said smiling. But seeing the seriousness of his question, she said, "The mark has so often been called a charm that I was simple enough to imagine it might be so."

"On another face it might," answered her husband, "but not on yours. No dear, Nature made you so perfectly that this small defect shocks me as being a sign of earthly imperfection."

"Shocks you!" cried Georgiana, deeply hurt. Her face reddened and she burst into tears. "Then why did you marry me? You cannot love what shocks you!"

We must explain that in the center of Georgiana's left cheek there was a mark, deep in her skin. The mark was usually a deep red color. When Georgiana blushed, the mark became less visible. But when she turned pale, there was the mark, like a red stain upon snow. The birthmark would come and go with the emotions in her heart.

The mark was shaped like a very small human hand. Georgiana's past lovers used to say that the hand of a magical fairy had touched her face when she was born. Many a gentleman would have risked his life for the honor of kissing that mysterious hand.

But other people had different opinions. Some women said the red hand quite destroyed the effect of Georgiana's beauty.

Male observers who did not praise the mark simply wished it away so that they did not see it. After his marriage, Aylmer discovered that this was the case with himself.

Had Georgiana been less beautiful, he might have felt his love increased by the prettiness of that little hand. But because she was otherwise so perfect, he found the mark had become unbearable.

Aylmer saw the mark as a sign of his wife's eventual sadness, sickness and death. Soon, the birthmark caused him more pain than Georgiana's beauty had ever given him pleasure.

During a period that should have been their happiest, Aylmer could only think of this disastrous subject. With the morning light, Aylmer opened his eyes upon his wife's face and recognized the sign of imperfection. When they sat together in the evening near the fire, he would look at the mark.

Georgiana soon began to fear his look. His expression would make her face go pale. And the birthmark would stand out like a red jewel on white stone.

"Do you remember, dear Aylmer, about the dream you had last night about this hateful mark?" she asked with a weak smile.

"None! None whatever!" answered Aylmer, surprised.

The mind is in a sad state when sleep cannot control its ghosts and allows them to break free with their secrets. Aylmer now remembered his dream. He had imagined himself with his assistant Aminadab trying to remove the birthmark with an operation. But the deeper his knife went, the deeper the small hand sank until it had caught hold of Georgiana's heart.

"Aylmer," said Georgiana, "I do not know what the cost would be to both of us to remove this birthmark. Removing it could deform my face or damage my health."

"Dearest Georgiana, I have spent much thought on the subject," said Aylmer. "I am sure it can be removed."

"Then let the attempt be made at any risk," said Georgiana. "Life is not worth living while this hateful mark makes me the object of your horror. You have deep science and have made great discoveries. Remove this little mark for the sake of your peace and my own."

"Dearest wife," cried Aylmer. "Do not doubt my power. I am ready to make this cheek as perfect as its pair."

Her husband gently kissed her right cheek, the one without the red hand.

The next day the couple went to Aylmer's laboratory where he had made all his famous discoveries. Georgiana would live in a beautiful room he had prepared nearby, while he worked tirelessly in his lab. One by one, Aylmer tried a series of powerful experiments on his wife. But the mark remained.

Georgiana waited in her room. She read through his notebooks of scientific observations. She could not help see that many of his experiments had ended in failure. She decided to see for herself the scientist at work.

The first thing that struck Georgiana when entering the laboratory was the hot furnace. From the amount of soot above it, it seemed to have been burning for ages. She saw machines, tubes, cylinders and other containers for chemical experiments. What most drew her attention was Aylmer himself. He was nervous and pale as death as he worked on preparing a liquid.

Georgiana realized that her husband had been hiding his tension and fear.

"Think not so little of me that you cannot be honest about the risks we are taking," she said. "I will drink whatever you make for me, even if it is a poison."

"My dear, nothing shall be hidden," Aylmer said. "I have already given you chemicals powerful enough to change your entire physical system. Only one thing remains to be tried and if that fails, we are ruined!"

He led her back to her room where she waited once more, alone with her thoughts. She hoped that for just one moment she could satisfy her husband's highest ideals. But she realized then that his mind would forever be on the march, always requiring something newer, better and more perfect.

"The chemical process went perfectly," he said. "Unless all my science has tricked me, it cannot fail."

To test the liquid, he placed a drop in the soil of a dying flower growing in a pot in the room. In a few moments, the plant became healthy and green once more.

"I do not need proof," Georgiana said quietly. "Give me the glass. I am happy to put my life in your hands." She drank the liquid and immediately fell asleep.

Aylmer sat next to his wife, observing her and taking notes. He noted everything -- her breathing, the movement of an eyelid. He stared at the birthmark. And slowly, with every breath that came and went, it lost some of its brightness.

"By Heaven! It is nearly gone," said Aylmer. "Success! Success!"

He opened the window coverings to see her face in daylight. She was so pale. Georgiana opened her eyes and looked into the mirror her husband held. She tried to smile as she saw the barely visible mark.

"My poor Aylmer," she said gently. "You have aimed so high. With so high and pure a feeling, you have rejected the best the Earth could offer. I am dying, dearest."

It was true. The hand on her face had been her link to life. As the last trace of color disappeared from her cheek, she gave her last breath.

Blinded by a meaningless imperfection and an impossible goal, Aylmer had thrown away her life and with it his chance for happiness. In trying to improve his lovely wife, he had failed to realize she had been perfect all along.

"The Birthmark" was written by Nathaniel Hawthorne. It was adapted and produced by Dana Demange. Your storyteller was Barbara Klein.

chemical - adj. of or relating to chemistry

chemicals – n. elements found in nature or made by people; substances used in the science of chemistry

visible - adj. able to be seen

birthmark - n. an unusual mark that is present on the skin from the time when someone is born

Now it's your turn. Do you know of anyone who tries to make other people 'perfect?' Write to us in the comments section.