< Biden Releases Plan to Protect US Land and Water
Update Required To play the media you will need to either update your browser to a recent version or update your Flash plugin.
By Gregory Stachel
13 May 2021


President Joe Biden has released a plan that aims to conserve nearly one-third of America's land and water by 2030.

The plan, announced last week, calls for supporting local conservation projects across the country in an effort to safeguard public, private, and tribal areas.

The plan is described in a report called "America the Beautiful." It says the proposal aims to make conservation and restoration of land and water a top goal of the Biden administration. 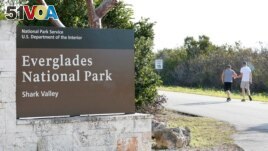 The plan would clean drinking water, increase green space, and improve access to outdoor enjoyment, the report says. It also aims to restore healthy fisheries and reduce the risk of wildfires.

The report says the efforts will produce thousands of new jobs while seeking new solutions to climate change and environmental justice. The plan calls for increased efforts to improve access to the outdoors by disadvantaged communities.

President Biden has set a goal of conserving at least 30 percent of U.S. land and water by 2030. The report says that if successful, the plan will help slow climate change and protect some of the country's most beautiful land for future generations.

The Center for American Progress is a private research organization that presents progressive ideas. It says that currently about 12 percent of the country's land and 25 percent of its water are protected.

The protected areas are not just parks. They include wilderness areas, refuges, agricultural land, forests and other areas covered under conservation agreements.

The plan suggests a series of actions. They include an expanded federal aid program to create local parks, support tribal conservation aims, expand wildlife areas and increase access to outdoor exercise. The proposal also calls for creating a program to organize civilians to work on conservation and restoration projects across the nation.

The plan follows through on one of Biden's main campaign promises. It also builds on the Great American Outdoors Act. The act was a 2020 law that approved nearly $3 billion for conservation and outdoor projects.

Biden's plan depends heavily on voluntary conservation efforts by farmers, forest owners and fishing communities. The administration did not provide a cost estimate for the proposal. However, officials said much of the spending could be covered by department budgets, the 2020 outdoors law, the 2018 farm bill and Biden's recently proposed $2.3 trillion infrastructure plan.

The report says the plan should be seen as "a call to action to support locally led conservation and restoration efforts of all kinds and all over America."

Matthew Daly reported on this story for the Associated Press. Gregory Stachel adapted the report for VOA Learning English. Bryan Lynn was the editor.

conserve – v. to keep (something) safe or from being damaged or destroyed

restoration – n. the act or process of returning something to its original condition by repairing it or cleaning it

access – n. the right or ability to approach, enter, or use

disadvantaged – adj. lacking the things such as money and education that are considered necessary for an equal position in society

refuge – n. a place where people or animals are protected from danger

infrastructure – n. the basic equipment and structures (such as roads and bridges) that are needed for a country, region, or organization to function properly