< Biden Proposes Making Preschool Free for Children
Update Required To play the media you will need to either update your browser to a recent version or update your Flash plugin.
By Dan Novak
11 May 2021


American President Joe Biden is making childcare and education a major concern of his administration.

In his first address to a joint session of Congress on April 29, Biden proposed a $1.8 trillion spending plan to expand government support for children, families and education. The plan, called American Families Plan, includes $200 billion for free pre-school for 3 and 4-year-olds.

The president said, "research shows when a young child goes to school — not daycare — they are far more likely to graduate from high school and go to college or something after high school." He added, "no matter what background they come from, it puts them in the position to be able to compete all the way through 12 years."

Preschool, also known as pre-kindergarten or pre-K, is a program to help children with the beginning steps of learning and socializing. Daycare centers focus more on caring for children than learning.

Rebecca Anguiano teaches preschool at an elementary school in Washington, D.C. The classes are bilingual. They are taught in both English and Spanish. She said students who attend two years of preschool have done better than those who have not.

Anguiano said, "If they miss those two years, it's kind of catch-me-up for them. I definitely feel that starting early—especially at a bilingual school—is key for a lot of success." 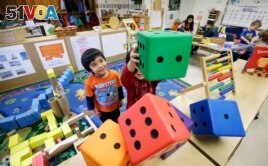 The nation's capital spends the most money per preschool student. It also has the highest percentage of students in pre-K classes. Seventy-nine percent of 3 and 4-year-olds attend preschool in Washington, DC. And nationwide, just 20 percent attend.

Washington is one of the most expensive cities to raise a child. A 2018 study says childcare in the city can cost up to $2,000 per month for each child. In some places, parents choose to stay home with their children instead of having a job and paying for care.

In 2018, research from the Center for American Progress showed that about 10 percent more mothers entered the workforce after the city started its preschool program. Student test scores have also gone up since the change. That year, Washington schools were among the few across the nation to see an increase in math and reading scores.

Josh Axelrod has two children attending preschool in Washington, D.C. He said the program is a "huge benefit" to living in the city. "Our experience... has been great," he added.

Washington's preschool program is not without its problems, however. Many elementary schools in the city do not offer preschool and some programs are better than others. There is also a very high demand for some preschool spots, which means that some children will not be placed into their neighborhood school. Others are not placed at all.

Biden's proposal comes at a time when preschool attendance has fallen by 25 percent in the past year, largely due to the pandemic.

The administration says free preschool nationwide could save the average American family $13,000 and benefit 5 million children. And it proposes to pay for the plan by raising taxes on wealthy Americans.

Republican opponents to the idea say it costs too much and that families will be making childcare decisions based on what the government wants. For the plan to pass, the president will need Republican support in an evenly divided Senate.

Senator Josh Hawley is a Republican from the state of Missouri. He shared his opposition in an opinion piece on Fox Business.

"No family should be forced into a particular childcare arrangement by the government. And no parent should be treated worse by the tax code for choosing to do the work of raising kids at home," he wrote.

Anguiano, the Washington, D.C. preschool teacher, sees universal preschool as a way to improve education equity. Many families from poorer areas cannot pay for private preschool, she said, keeping children away from school and parents away from working.

"I think expanding this nationwide, you will most definitely see not just an educational benefit for kids, but an economic benefit for families," Anguiano said.

Dan Novak reported this story for VOA Learning English. Hai Do was the editor.

graduate – v. to earn a degree or diploma from a school, college, or university

background – n. the experiences, knowledge, education, etc., in a person's past

key – n. something that is necessary in order to do or achieve something

particular – adj. used to indicate that one specific person or thing is being referred to and no others

arrangement – n. the way that things or people are organized for a particular purpose or activity

code – n. a set of laws or regulations

equity – n. fairness or justice in the way people are treated